Sugar is all around you. It’s in your cabinets. In your fridge. And, of course, given the pint of Ben & Jerry’s, in your freezer too. But consuming excessive added sugars is detrimental to your health. In a study published in April 2014 in JAMA Internal Medicine, adults who consumed […]

Sugar is all around you. It’s in your cabinets. In your fridge. And, of course, given the pint of Ben & Jerry’s, in your freezer too.

But consuming excessive added sugars is detrimental to your health. In a study published in April 2014 in JAMA Internal Medicine, adults who consumed 10 to 24 percent of their calories from added sugar (between 200 and 480 calories in a 2,000-calorie diet) had a 30 percent higher risk of dying from cardiovascular disease compared with those who keep their consumption to less than 10 percent. Eat 25 percent or more of your calories from added sugar (500 calories) and that number jumps to nearly three times the risk.

Confusingly, the recommended limit of added sugars differs among organizations. “I focus on the American Heart Association’s (AHA) number because they’re the strictest,” says Lauren Harris-Pincus, RDN, of Nutrition Starring You in Green Brook Township, New Jersey. The AHA advises that women limit their consumption to six teaspoons per day (25 grams [g]) and men cap themselves at 9 teaspoons per day (36 g). Recently released 2020 recommendations from the U.S. Dietary Guidelines note that in total, added sugars should make up no more than 6 percent of calories for any person age 2 years and up.

Remember, added sugar is sugar that has been added to foods to enhance their taste. Foods with added sugar include cookies and most dry breakfast cereals and granola bars, as well as condiments such as ketchup and barbecue sauce, along with yogurt and sugar-sweetened drinks, according to Johns Hopkins Medicine. Natural sugars, on the other hand, reside in plain dairy products, fruits, and vegetables. These foods come with a variety of nutrients your body needs for optimal health, including calcium and vitamin D (from dairy, as the National Institutes of Health points out), and fiber, vitamins, minerals, and antioxidants (from fruit and veggies, notes past research) — which is why experts recommend continuing to consume them.

Even if you wouldn’t call yourself a dessert lover, you may still find that sticking to this limit is tough. “I don’t have a sweet tooth,” writes Jennifer Ashton, MD, the chief medical correspondent of ABC News, in her book The Self-Care Solution: A Year of Becoming Happier, Healthier, and Fitter — One Month at a Time. “I rarely eat sugar, mostly because I avoid nearly all the processed carbs that contain it,” she says.

Before Dr. Ashton really examined how much she was eating, she gave herself a B+ for her sweet consumption. But she wanted to get an A+, so she committed to reducing her added sugar intake as much as possible over the course of a month, and she was shocked by how difficult this task was. Ashton found that her desire for sweets increased when she deprived herself of them, and she ate several cookies through the month. (In other words, if you’re also trying to cut back on the sweet stuff, she understands the struggle.)

You can learn from Ashton and other experts to finally get your inner sugar demons under control. Follow these steps to kick — or at least cut back on — sugar for good:

“I’m always a fan of adding versus taking away,” says Harris-Pincus. Approaching a challenge from a mindset of abundance or “can have,” makes it feel less punishing than when you say you can’t have x, y, or z. Practically speaking, in the context of reducing sugar, this means adding in nutrient-rich foods, like fruits, beans, nuts, seeds, whole grains, and lean protein.

“The more food you eat that’s nutrient-rich, the less hungry you are for things like sugary foods because you don’t have enough room for them,” she says. For instance, rather than eating a sandwich with chips (and then a cookie) for lunch, serve the sandwich with a side salad or sliced veggies dipped in hummus, plus a whole piece of fruit.

RELATED: 7 Foods With More Sugar Than You Think

Peer into your pantry or freezer. Are there trays of cookies, boxes of sweetened cereal, bars of granola, and the like? If sugary foods such as these are hanging around, you’re more likely to eat them, says Ashton. She recommends doing a sweep of your home to remove those items. Tell your family they can eat sweets outside the home this month.

3. If Nothing Else, Cut Out Sugary Drinks

Though sugar is added to many products (including “savory” foods you wouldn’t expect, like salad dressings), you can make the most profound, immediate impact, says Lisa Moskovitz, RD, founder of the New York Nutrition Group in New York City, by taking out a high-ticket item: sweetened beverages.

Can the “soda, sweetened teas, and caffeinated beverages,” she says. Not only is it a good sugar category to cut, but you’ll also benefit in particular ways by removing sugary liquids. “When you drink your sugar, versus eating it, it usually breaks down a lot quicker, causing sky-high blood glucose levels and then quick crashes soon after,” she explains, and research supports her. Moskovitz says these glucose spikes send your energy levels way up and down, and you may experience cravings for even more sugar.

Kicking this source of added sugar can have whole-body perks. As a standalone item, sweetened beverages including soda and fruit drinks are independently associated with a higher risk for obesity, type 2 diabetes, heart disease, gout (a form of arthritis), nonalcoholic liver disease, and dental issues, notes the Centers for Disease Control and Prevention.

Instead of sugary beverages, try upping your water intake, Ashton recommends in her book. Add a fresh slice of fruit to your H2O, or opt for an unsweetened sparkling beverage if you’re craving something with carbonation.

RELATED: Thirsty? Try One of These Refreshing Alternatives to Soda

4. Move Onto Another Heavy Hitter: Desserts

Next place to tackle, says Moskovitz, is desserts. (This doesn’t mean no desserts ever! See below.) Reducing the amount of foods that have a lot of sugar but not many nutrients is a good next step. That includes candy, desserts, and snack foods. “Considering you’re not getting a whole lot of nutritional value from them, your body won’t miss them,” she says. Your head might — and that’s where a moderate approach comes in handy.

It’s tough to know where sugar hides if you aren’t on the up with all the names sugar hides under. Added sugar is in nearly three-quarters of packaged foods and goes by 61 names, according to SugarScience from the University of California in San Francisco. That includes: agave, honey, beet sugar, coconut sugar, fruit juice, syrup (of any kind), sweet sorghum, and ingredients with words ending in “-ose.” The latter includes high fructose corn syrup, sucrose, and dextrose.

Good news, though: New labeling laws require companies to list the amount of added sugar in food (previously, natural and added sugars were all lumped together in the “sugar” category). This transparency for consumers will help prevent more than 350,000 cases of heart disease and about 600,000 cases of type 2 diabetes, according to the authors of an April 2019 study published in Circulation.

6. Treat Yourself, but Make It Just That: A Treat

Sugar in your diet really doesn’t need to be all or nothing. But make those times you eat a sugary food entirely worth it. “I encourage patients, even those who want to lose weight, to indulge in the occasional treat when and if it presents itself — otherwise you can feel deprived and set yourself up for failure,” says Ashton. If buying an entire pint of Häagen-Dazs is too tempting, opt for a lower-sugar ice cream varieties in moderation. Moskovitz suggests one ⅔ cup serving of vanilla bean Halo Top ice cream, which has 4 g of added sugar. In comparison, a ⅔ cup serving of Häagen-Dazs vanilla bean ice cream packs 24 grams of added sugar! Whichever sweet you pick, enjoy it to the fullest, with intention and no guilt.

2 Must-Have Ingredients for Helping Others Grow

Thu Oct 1 , 2020
Those in helping professions, such as teachers, doctors, mentors, often say that serving, supporting, or facilitating the development of others is the greatest honor of their lives. Whether you’re hoping to help others grow as a manager, a parent, a teacher, or a peer, you need two ingredients to succeed: […] 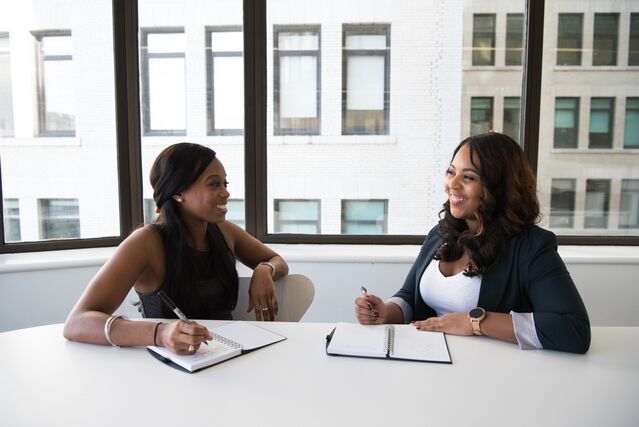