Laura Reiley, the Washington Post Like most restaurant groups around the country, BBQ Holdings’ four restaurant brands got hit hard by the pandemic – shelter-in-place orders and limitations on dining-room occupancy meant sales plummeted in March, April and May. At Famous Dave’s, an affordable barbecue concept with 125 locations mostly […]

Like most restaurant groups around the country, BBQ Holdings’ four restaurant brands got hit hard by the pandemic – shelter-in-place orders and limitations on dining-room occupancy meant sales plummeted in March, April and May. At Famous Dave’s, an affordable barbecue concept with 125 locations mostly in the Midwest, and Granite City Brewery, a group of 18 restaurants in the Upper Midwest, staff stood idle and annual sales projected at $6 million per store started looking like half of that.

Management made a decision, embracing one of the industry’s hottest trends, one that has been supercharged by the coronavirus crisis.

It decided to raise a ghost. These are kitchens without dining rooms, culinary concepts designed for delivery, most never becoming a bricks-and-mortar destination for diners.

Ghost kitchens, dark kitchens, virtual restaurants, cloud kitchens: The path forward for restaurateurs trying to escape the collapse of their business models is illuminated by a digital glow. The stratospheric rise in online ordering and food delivery during the pandemic has prompted restaurateurs to chase those delivery dollars in a number of novel ways.

For many, it’s a matter of survival.

Nearly two-thirds of New York restaurants responding to a questionnaire from the New York State Restaurant Association say they are likely to close by the end of the year without some form of financial relief. Employment in restaurant and food service jobs is down by about 2.5 million since February, according to U.S. Bureau of Labor Statistics data released Sept. 4.

Technomic, a consulting firm for the restaurant industry, estimates that 20 to 25% of independently owned restaurants will never reopen.

Granite City kitchen staff set to work with a purpose, serving up the chain’s usual fancy burgers and flatbreads paired with its craft beers, but also switching gears to churn out Famous Dave’s barbecue for delivery only. At the end of August, nine Famous Dave’s locations also began to produce fare for Hayward’s Hen House, an all-new, chicken-centric, virtual-only concept delivered by DoorDash and Grubhub.

No bricks-and-mortar restaurant, just one concept producing the food of another, a sleight of hand, like donning a costume and a funny accent – all to feed Americans’ growing appetitefor delivery.

“When you get hit in the face with a pie, you react very quickly. That’s what covid-19 has forced us to do,” says Jeff Crivello, BBQ Holdings’ chief executive.

Adding ghost concepts to Famous Dave’s and Granite City Brewery locations required a bit of additional equipment and training – he estimates $50,000 per store to get up and running – but the payoff is potentially big.

Without having to pay for additional rent, utilities or staff, he says, he expects each ghost kitchen to produce $6,000 to $12,000 in additional sales per week. Profits are different, too: If a customer spends $10 with a ghost concept, Crivello expects $3 to $4 to be profit. With a typical sit-down, he says, the profit is an estimated $1.50.

At the end of 2019, CloudKitchens, a start-up from Uber’s former chief executive Travis Kalanick, raised $400 million from Saudi Arabia’s Public Investment Fund to buy cheap real estate and build shared kitchens for restaurants to rent in the United States, China, India and the United Kingdom.

Kitopi, short for Kitchen Operation Innovation, based in Dubai and New York City, raised $80 million to expand its global network of more than 30 ghost kitchens. Under this model, a brand pays an onboarding fee to join Kitopi, trains Kitopi chefs how to cook its recipes and then receives royalty fees on all sales. Some industry experts call this model “Franchising 2.0.”

Even as bricks-and-mortar restaurants have struggled with limitations on indoor dining during the pandemic, ghost kitchen ventures have thrived.

“So many restaurant and restaurant-adjacent businesses are having to rethink their whole existence since the pandemic that many more operators and companies of all kinds are making bets on this,” Schaefer says. It has made for strange bedfellows, he says, with companies such as Sodexo and Aramark – which ordinarily provide food service for cafeterias, convention halls and sporting venues, many of which are still closed – partnering with consumer packaged-goods companies like Unilever to make prepared meals in ghost kitchens for delivery via companies like Uber Eats.

Since the pandemic started, Brinker International – the parent company of Chili’s and Maggiano’s Little Italy, with more than a combined 1,650 kitchens nationwide – has tested a virtual-only brand called It’s Just Wings that is delivered via DoorDash and on track to generate $150 million.

FSC Franchise, which owns Beef O’Brady’s and Brass Tap restaurants in Florida, also tested a fast-casual virtual-only chicken concept for eight weeks this summer called the Hatchery, which did well enough that the company launched its first bricks-and-mortar Hatchery at the end of August.

“We wanted something that was more cutting-edge, something in the fast-casual chicken segment, which is the hottest segment in the industry right now,” says chief executive Chris Elliott. “Our chief operating officer said, ‘Why don’t we run this out of our test kitchen as a ghost kitchen?’”

Virtual Kitchen, another start-up founded by former Uber executives, announced Sept. 8 that it had raised $20 million to expand its network of “delivery-optimized kitchens,” according to Securities and Exchange Commission filings. Ghost kitchen Zuul, which produces to-go dishes for Sweetgreen, Stone Bridge Pizza and Salad, Sarge’s Delicatessen, Junzi and Naya Middle Eastern Counter and Grill at a single location in New York City, announced at the end of July that it had secured another $9 million to expand into other New York neighborhoods.

“It’s been a wild time, nothing I ever anticipated dealing with,” he says. “It’s accelerating what we thought was inevitable: a very delivery-focused industry.”

Manicone says a benefit of ghost kitchens is that they lower the financial barrier to entry for new operators. The flip side is that new or unqualified operators may experience higher rates of failure in an industry that already has extremely steep rates of closure.

For Zuul, Manicone says, the next step is refining a proprietary ordering platform that allows customers to order from all of Zuul’s brands – one customer wants a salad from this concept, another family member hankers for sushi from a different vendor, and it’s all ordered in a single place and delivered by a single person, removing the need for third-party aggregators like DoorDash.

“It makes it more profitable for everyone,” he says. “The third-party aggregators is a $26 billion industry that everyone hates. No one wins in that scenario.”

But not everyone will be winners in this new “dark” restaurant landscape.

“Everything about a sit-down restaurant is about location and foot traffic,” he says. “The extra unemployment insurance has had a huge role in keeping restaurants going. If that goes away, that’s going to have knockdown effects.”

Camilla Marcus permanently closed her West-bourne restaurant in New York’s SoHo neighborhood in early September. She is a member of the Independent Restaurant Coalition, which is pushing Congress to pass the Restaurants Act that would give the industry $120 billion in aid. She says a pivot to delivery-only isn’t desirable or feasible for most independent restaurants.

“The best way for those dynamics to work is if you have high volume,” Marcus says. “It’s less for the neighborhood gem. It’s not what restaurants were designed to do: What we create are experiences and interactions. This isn’t about a race to the bottom or how many widgets you can produce at a higher volume.”

Matt Newberg, founder of Hngry.tv, a new media start-up covering the intersection of food and technology, says the rise of off-site digital concepts with limited overhead are an existential threat to casual-dining restaurants and independent mom-and-pop shops. He predicts there will only be two types of dining experiences in the future: those in the special-occasion “experiential” bucket and those in the convenience bucket, a category that will be dominated by delivery.

“We’re in a period of forced innovation for restaurateurs,” he says. “The industry was not being operated at full efficiency pre-pandemic and there will be a lot of bloodshed. It’s not reasonable to assume every restaurateur is a good businessperson.”

The big winners moving forward, he says, are those that offer their own apps, driving consumers to order directly from them and not via a third-party aggregator – he points to Sweetgreen and Chipotle as successes, as well as Papa John’s, which he says built its own app and swiftly got an “astonishing” number of downloads.

“You want to incentivize people to order directly from your platform,” Newberg says. “You want to own as much of it as possible. If you do DoorDash, you’re taking a 30% haircut on every order. Restaurateurs need to be savvy about the delivery part: Don’t use them for marketing, use them for delivery.”

But the obfuscation of where customers’ food is being made and who is making it prompts questions. If companies such as Chick-fil-A and Wendy’s are turning to dark kitchens and third-party operators to produce and deliver their food, is there a catfishing element to online ordering? Industry experts wonder whether customers are getting the “real thing” with their deliveries.

“The further food preparation is removed from a restaurant’s retail location, the less authentic and appealing the meal becomes to consumers,” Fleischmann says. “Who wants to think of their food being made in a bizarre production facility?”

A celebrity chef’s recipe as interpreted by a third party, delivered by an aggregator like Uber Eats, makes any connection to that original restaurant tenuous at best, and the anonymity of ingredients removes all pretense of careful farm-to-table provenance.

Manicone says ghost kitchen facilities are subject to the same federal and state food-safety laws as bricks-and-mortar restaurants and have regular health inspections, though they are not given letter grades to post on the premises, which makes it impossible for customers to track a concept’s food safety record.

According to a 2019 Brookings analysis of low-wage jobs, 87.4% of cooks and kitchen workers are considered low-wage, as well as 79.6% of servers. And with ghost kitchen workers more akin to hourly gig workers, with few protections like health insurance, vacation pay and the bargaining power of labor unions, their economic outlook could be even grimmer.

“Virtual restaurant workers are more vulnerable because of the nature of the employment itself,” says Sekou Siby, chief executive of Restaurant Opportunities Centers United, a not-for-profit organization and worker center. “A ghost kitchen may change locations, like a pop-up, so the Labor Department doesn’t know where it is. In order to file a complaint, you need to know where your employer is.”

ROC United’s chief program officer, Teófilo Reyes, says labor advocates are concerned about ghost kitchens using tips on delivery orders as a pretext to lower what they pay workers. He calls the situation for these workers “precarious.”

“You can’t see what’s happening and who is working there and what their working conditions are like,” he says. 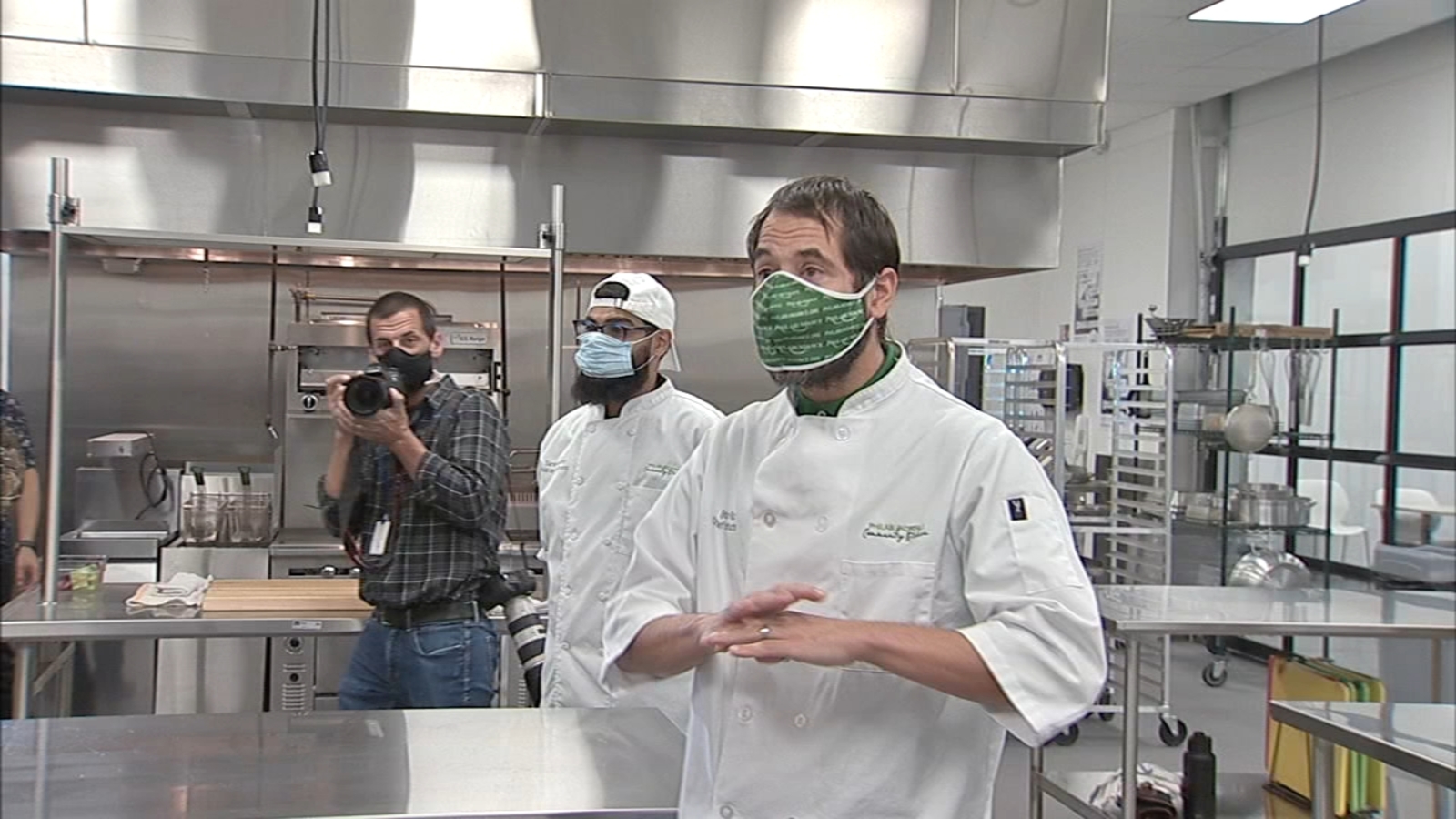