In some ways, food trucks are better off than restaurants right now: Operators aren’t trying to heat patios to prolong outdoor dining, space out tables, or decipher air-filtration systems. Still, it’s a difficult road ahead as winter looms, with more people working at home and less foot traffic in urban […]

In some ways, food trucks are better off than restaurants right now: Operators aren’t trying to heat patios to prolong outdoor dining, space out tables, or decipher air-filtration systems. Still, it’s a difficult road ahead as winter looms, with more people working at home and less foot traffic in urban areas. Can they ride out the storm?


“I think things will get worse before they get better,” says Jon Moy, who operates the Moyzilla dumpling truck. Normally he runs a fleet of four vehicles, but he’s down to one or two, and he recently closed a brick-and-mortar location in the Seaport. He previously managed 28 people, but now he’s working with his wife and two other employees.

“We secured a PPP loan, but there’s such a lack of business that it’s been hard to ramp up and create the jobs we had before COVID,” he says. Lack of foot traffic is a problem; now, he’ll work small parties or park at breweries, such as Mighty Squirrel in Waltham. He also parks in front of Boston Children’s Hospital each Tuesday.

“But that will change when people aren’t enthusiastic about going out to a truck in winter,” he says. “We’ll still be at Mighty Squirrel, but it’s looking sparse.”

To keep money coming in, he’s considering selling prepackaged frozen dumplings. He admits that he’s in a better position than many; his family operates Maui restaurant in Brockton and the Kowloon in Saugus.

“We’re fortunate because we’re based out of my family’s restaurant. We don’t pay rent for a shared kitchen, and any money we do make goes to payroll,” he says. “But the math doesn’t check out if we’re doing 20 percent of pre-COVID business. We’ve been operating at a loss consistently through the months we have reopened, and we’ve been in a false reality with PPP loans, which have floated us. It’s not a long-term solution, and our forgiveness period is about to expire.”

Another issue is marketing, says CommonWealth Kitchen cofounder and executive director Jen Faigel. Her Dorchester nonprofit provides shared kitchen space, parking, and other resources to food trucks. She normally works with roughly a dozen trucks, but only three are on the road. Some are temporarily hibernating, others have shuttered for good.

“The problem is, if nobody knows where to find you and there’s no concentration of people in reliable places, what do you do? The simple math on a food truck is, if you go out for a lunch gig, you have to do at least 125 tickets to cover your costs. [Trucks] are now doing 30 tickets,” she says.

Winter is usually a tough season for trucks, she admits, but usually fall is busy enough to carry them through. No more.

There are solutions: CommonWealth has partnered with area hospitals — one niche where density still exists — and some of her trucks rotate in and out during lunch. They have a similar arrangement outside of the Museum of Fine Arts.

“Imagine if every major corporation in Boston reallocated their catering budgets to efforts like our CommonTable program, which is putting hard-hit small and independent businesses and their employees to work feeding their neighbors in need,” she says. “Imagine if office building owners and residential property management companies partnered with food trucks to have them set up in locations with high concentrations of people, and provide sustained marketing support to drive customers. The domino effect of keeping these small and independent businesses operating — and more people employed — is enormous.”

Neighborhood StrEATS is also helping to keep food trucks alive. The program is an initiative of the Food Truck Festivals of America and was created in response to the pandemic. StrEATs operates in Newton, Waltham, Watertown, and beyond. A local resident signs up as a StrEATs “ambassador” and receives marketing materials to alert neighbors about schedules and menus. Households preorder via app and choose a time slot for pickup to prevent crowding. It’s a nice break from the remote work-and-school grind.

“As a food truck festival company, we knew it would be a very long time before we would be allowed to have thousands of people in one place enjoying food from dozens of food trucks,” says founder Anne-Marie Aigner.

Truckers are masked and gloved, and they arrive in the neighborhood ready to dole out preorders.

“People really love a food truck coming to their block, and the food trucks appreciate the business,” Aigner says. “[Trucks] lived on office workers, tourists, students, and walk-by urban traffic, so StrEATs has been a big help with so much remote working and schooling. We’ve found that folks are grateful for another safe option, and the food trucks are extremely grateful for the business.”

Mary McPartland from Frozen Hoagies is a StrEATer.

“I’ll do whatever I need to do to keep money coming in,” she says.

She recently shuttered her Somerville storefront and now relies on business from a Winchester brick-and-mortar as well as from her truck. She specializes in ice cream cookie sandwiches, but she’ll pivot to doughnuts, warm cider, and baked goods as it gets cooler.

StrEATS has been helpful to get the word out about her business, and it’s also a handy way to dodge delivery fees from delivery services such as GrubHub. Instead, she’s putting food into the hands of customers directly, and chatting up her business in the process.

“People ask me for business cards. Even if it doesn’t help right now, it will in the future. It builds a better reputation,” she says.

Whoopie Wagon, a Topsfield-based sweets truck, also participates in StrEATS. They’ve refocused their business away from Boston, where they parked at City Hall and on the Greenway, focusing instead on smaller communities such as Gloucester and Tewksbury. They also run shops in the northern suburbs.

“Our stores are busier than usual. There are a lot more people in the suburbs,” says owner Mary Bandereck. “Nobody has really been down in Boston during the springtime.”

“It was the first time we ever welcomed trucks into neighborhood locations that weren’t commercial or tourist locations. We wanted to bring the trucks to where people are. We tried to put a truck in every single neighborhood,” says Natalia Urtubey, director of small business in the mayor’s office of economic development.

Some neighborhoods fared better than others. Trucks at Franklin Park and West Roxbury did well; those in Charlestown and Chinatown struggled, she says. Her office is contemplating new locations in the future.

Other separately run city locations, such as the Greenway, have also tried to be more hospitable to trucks. Richard Cambriello from Daddy’s Bonetown Burgers is grateful for the Greenway’s willingness to negotiate on site fees — including waived fees in March and April. But in a quiet city, it might not be enough. Instead, he’s banking on parking at breweries throughout the winter, such as Night Shift in Everett, as well as catering and private parties.

“Just the other day, I was in front of our commissary and a woman walked by, asking me about my food truck. She told me her son was coming home from Colorado, and she wanted to do something fun for him. She said there wouldn’t be too many people and that she would pay cash. I said, ‘Now, you’re talking my language!’ ” he says. “A few hundred dollars and home by 7 p.m.? I signed up for that.”

Ultimately, though, these businesses depend on foot traffic, not one-off parties.

“We’ll just keep trucking along, no pun intended.” Moyzilla’s Moy says. “But there really is no easy answer. It has not been a profitable time.”

Wed Oct 14 , 2020
A sheep farmer was sentenced to 14 years in prison Monday for his plot to use baby food laced with metal shards to blackmail one of Britain’s biggest supermarket chains. Nigel Wright planted jars of the contaminated baby food in Tesco grocery stores and sent dozens of letters and emails […] 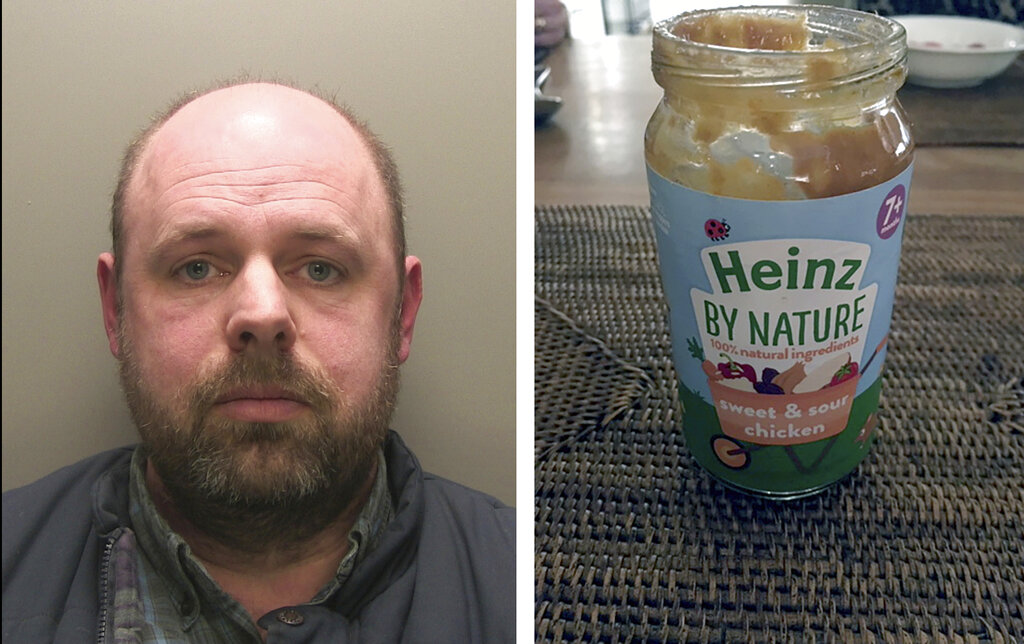