Meat processing outlets are typically preparing for a surge in game orders during the fall, but many are still inundated with beef and pork overflow that hunters are likely to be turned away this year. The Mitchell Locker is generally able to book orders within a month, but is now […]

Meat processing outlets are typically preparing for a surge in game orders during the fall, but many are still inundated with beef and pork overflow that hunters are likely to be turned away this year.

The Mitchell Locker is generally able to book orders within a month, but is now operating at capacity until May 2021 after taking on additional beef and pork orders following the closing of major plants due to the pandemic.

However, Dehaai’s Professional Wild Game Processing in Chamberlain is still working to fill game orders in addition to the added beef and pork orders. Owner Lee Dehaai is expecting a minimum of 100 extra deer and business has been increasing in elk processing. The extra work is time consuming, though, so customers may require understanding if the wait is a bit longer.

Dehaai estimated processing 500 deer per season on average, but that number could balloon to 600, while he also expects 40 to 50 elk.

Fall game orders are usually finished late in the spring, according to Dehaai, and that timeline has not been altered. He is also asking customers to make reservations to ensure the order can be completed. But the length of time to fill the order is worth the convenience factor for many people.

“We’ll work a little longer hours during that time of the year,” Dehaai said. “I try to have all the deer done by May. That’s usually our goal. … The people that know how to do it themselves will just do it. They want the convenience to just drop it off.”

Meanwhile, local lockers are not fretting over the extra beef and pork business, but there is some guilt in declining loyal wild game customers. Even more unnerving is the struggle to point customers to a locker that is processing wild game this fall.

The Mitchell Locker may not have time to handle the entire deer carcass as usual, but they are offering to process deer trim if customers are willing to debone and freeze the meat until April when business slows down.

Not offering services to hunters this fall does alleviate a problem for the Mitchell Locker as many customers never return to pick up orders after they have been processed.

“I would say probably four out of 10 people never come back and get their deer products anyway,” Mitchell Locker manager Lisa Munroe said. “So, honestly some of it is a waste of our time. I still have four deer sitting in my freezer and I can’t even get a hold of the people to come back and get it.”

With meat lockers filled to capacity, hunting guide Mike Kuchera believes it could be a prime opportunity for someone to pocket extra cash by becoming an independent processor, particularly with pheasants.

Skinning a pheasant takes less than 2 minutes and cleaning more than 100 birds per day at roughly $4.50 per bird would create a considerable amount of income, particularly during a strong season.

“People come to South Dakota on vacation and pheasant hunting is expensive,” said Kuchera, owner of Mike Kuchera’s Guide Services. “They want to go have dinner or a cocktail, they don’t want to pull feathers and guts at the end of the day. … When you ask people to come and spend money, you have to produce. When you tell someone you’re going to give them steak, don’t give them hamburger. It’s a good way to irritate people.”

Limited options in processing is not a concern for South Dakota Game, Fish and Parks Department Deputy Secretary Kevin Robling, who has processed his own game for years.

Robling hunts and processes elk, antelope and deer, while also cleaning his own ducks and geese, along with slaughtering hogs, to feed his family during the winter. Robling also has a smokehouse on property, but he says the necessary tools to process meat are not sophisticated or expensive.

Most hunters debone animals in the field and when it is time to process the meat, Robling says a low-grade meat grinder, which can cost less than $100, should suffice. He owns a sausage stuffer and a vacuum sealer for packaging, both of which can also cost less than $100.

“As long as you wrap it in freezer paper and use a vacuum sealer, those things can preserve meat for a couple years,” Robling said. “I use a deep freeze. I have three little kids, so we definitely go through a lot of meat and enjoy it.”

As the Mitchell Locker is forced to turn away wild game business, they have received calls from hunters regarding advice to process meat like Robling does. Both Munroe and Robling agree that the biggest key to self-processing is the temperature of the animal after harvesting.

When meat hangs in lockers, the temperature is steady, keeping it frozen. But many in-home freezers have a defrost feature, allowing meat to begin to dethaw when it turns on. The endless cycle brings down the lifespan of the meat. Munroe says meat can last nearly 18 months in steady freezing temperatures, where as it may only last up to seven months at home.

“When your freezer at home goes on defrost, it can heat up to 40 or 50 degrees,” Munroe said. “Then your meat starts to do a little bit of unthawing, and then it kicks back into freeze, it refreezes it. Our freezers at the locker have two compressors. When one goes into defrost, the other kicks in. Our freezer never varies in temperature.”

Tue Oct 6 , 2020
(L) A video call celebration with family in the United States and the Philippines. (R) A sign to remind guests to stay distant during a birthday party. Collage: VICE / Images: Courtesy of Regine Anastacio and Joanna Hirsch  In June, at the peak of the pandemic in Washington D.C., Joanna Hirsch found herself […] 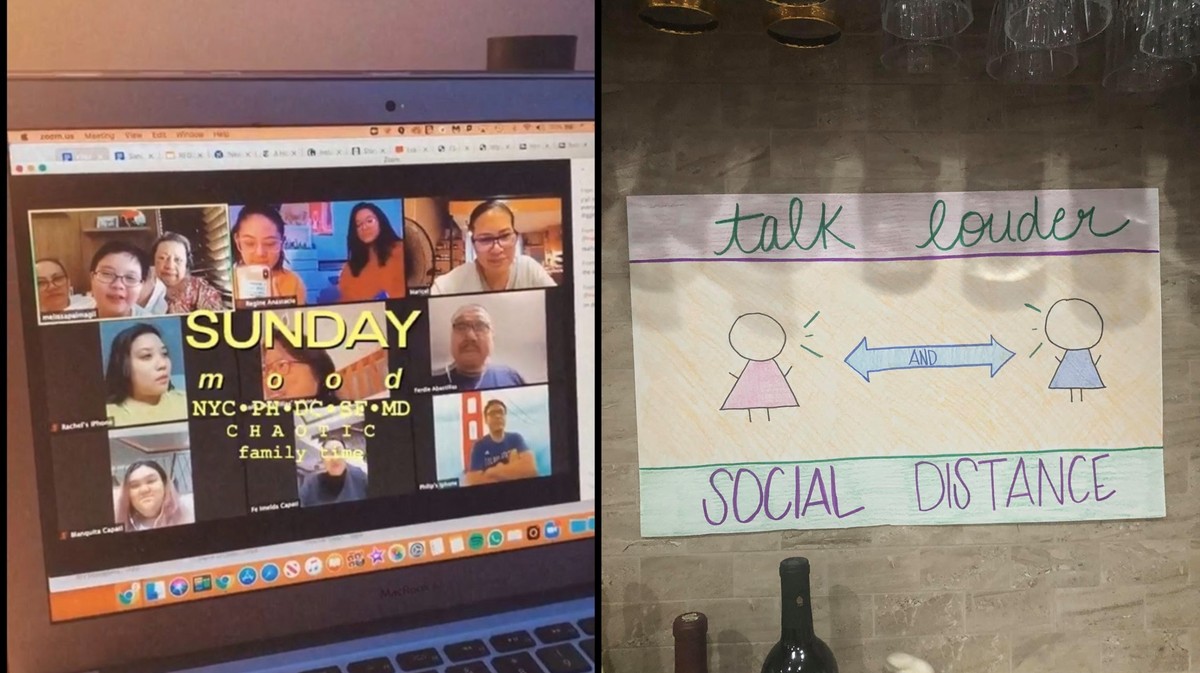