click to enlarge Young Kwak photo From left: Owners Angel and Aaron Fiorini, and Kitchen Manager Nico Salakar. Market Street Pizza Parlor on Hillyard’s south side feels like it’s been part of the neighborhood for decades. An old-school vibe emanates from the pizzeria’s […] 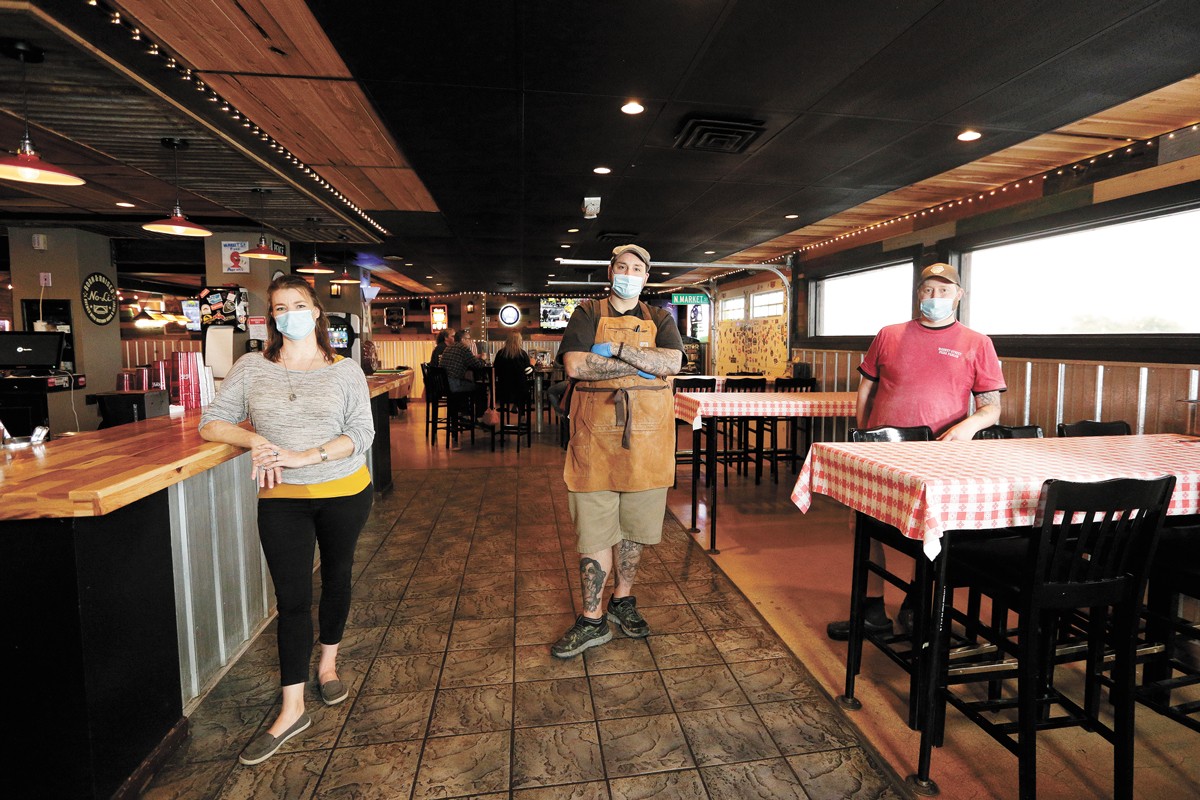 Market Street Pizza Parlor on Hillyard’s south side feels like it’s been part of the neighborhood for decades.

An old-school vibe emanates from the pizzeria’s 8,000-square-foot building, a former comedy club and live music venue perched on the bluff just as Market bends east and becomes Greene Street before crossing over the Spokane River.

Inside the main entrance, a room to the left with confetti-patterned carpet is filled with arcade games, including remnants of the Spokane landmark Five Mile Heights Pizza, a major inspiration for Market Street’s family-friendly atmosphere. To the right, tables covered with red-and-white checkered tablecloths line a long room leading toward the bar. Despite the feeling it’s been around for much longer, Market Street Pizza is just shy of its one-year anniversary, having opened in mid-November 2019.

The spot’s casual, neighborhood vibe, however, belies the attention to detail and quality that goes into making its thin-crust, East Coast-style pies.

Co-owner Aaron Fiorini, a Hillyard native who opened the restaurant with his wife Angel, also a Hillyard kid, spent months perfecting the recipe for Market Street’s long-fermented pizza dough. Fiorini dug deep on the web to figure out how to make the kind of ultra-traditional crust found in some of the East Coast’s longest-running spots, like Sally’s Apizza and Frank Pepe Pizzeria, both in New Haven, Connecticut, and Di Fara’s in Brooklyn.

“I almost became a historian of pizza,” Fiorini says. “I started researching what makes the best pizzerias the best, and why they’ve been open for 100 years. We tried 18 different flours and I think we tried 20-plus types of pepperoni, cheese and sauces. It was just never good enough.”

The result of all that fine tuning is a lightly charred, thin and crispy crust with plenty of rise along the outer edge. The carefully crafted base showcases a large collection of topping combos that range from a classic Margherita ($14/$22) to Tuesday’s street-taco-inspired pie ($15/$26) with carne asada, and the breakfast pizza ($15/$26), topped with bacon gravy, aged mozzarella, smoked bacon, sausage, ham, spinach, jalapenos, egg and hot honey, served only on Sundays.

Market Street’s brick oven-cooked pizzas are sorted into “traditional” or “specialty.” All pizzas are 12 or 18 inches, ranging from $10 to $28.

The “traditionals” are Fiorini’s nod to old-school Italian-American classics, including the popular Tomata Pie ($14/$22), dubbed “the OG classic East Coast Italian pie” with housemade fresh and aged mozzarella, tomato sauce, basil, parmesan, olive oil and sea salt. Also in that category is an anchovy pizza, and the Romarosso, sans cheese.

“If you look at old-school menus, pepperoni wasn’t really listed” as a topping, Fiorini says. “It was things like sauce, cheese, anchovy, and they had maybe four pizzas. The anchovy is not a huge seller in Spokane, but it’s all an homage.”

“The Hillyard Luau has the Maui marinade from Bargain Giant. We reduce that down and that is just showing love for Hillyard,” Fiorini explains.

For the uninitiated, Maui marinade is a spice blend found only at the locally owned Bargain Giant on east Empire Avenue. The blend of “tropical sauces and spices” is used as a marinade on cuts of steak, pork and chicken.

“Ever since we were kids we’ve been getting Maui steak and chicken, so we thought ‘How can we put that on a pizza?’ It’s a classic Spokane staple,” he continues.

Among the other creative specialties from Market Street’s team, including kitchen manager Nico Salakar, is the Wooster Street with olive oil, mozzarella, thinly sliced potato, onion, rosemary and parmesan. That pie’s name is a nod to the street address of the two New Haven pizzerias, Sally’s and Frank Pepe’s, that influenced Fiorini’s recipes.

“We like to break a lot of rules with pizza,” Salakar says.

“Wanting to create is something me and Nico are always on top of,” Fiorini adds. “I get bored making the same pizzas after a week. We never stop the creativity — we always want to elevate and raise expectations when someone comes here.”

Pizza isn’t the only thing Market Street is known for amongst local diners. On the flip side of its menu is a collection of Italian-inspired and classic pub appetizers ranging from a caprese salad and stuffed peppers to meatballs, hand-cut French fries and fried dill pickles. There’s also a variety of chicken wings ($13.50; boneless or bone-in), another category where the kitchen team’s creativity shines.

“A chicken wing is a chicken wing, and while ours alone is delicious, what makes it shine is the sauces,” Salakar says.

All crafted in house, Market Street’s wing sauce choices include the Cowboy, a habanero barbecue sauce, and the Boom Boom, a creamy chili sauce sprinkled with sesame seed, cilantro and green onions. The Firecracker wings were inspired by sushi rolls with a sauce made from sweet hoisin, cilantro, garlic, jalapeno, green onion, spicy mayo and sesame.

While COVID-19 significantly disrupted the pizza parlor’s early momentum, hitting a few months after opening, the restaurant’s large dining room has been open at half capacity since mid-May. (The arcade area and other games, including darts and a billiard table, remain off limits for now.) The Fiorinis estimate more than half of Market Street’s orders are for carryout.

An active social media presence and loyal fanbase, however, have helped them get by. Management regularly interacts with customers via the restaurant’s Facebook page, where they also share specials and host weekly free pizza drawings. Positive word-of-mouth from customers is also frequently shared in several local dining-focused Facebook groups.

“We’re very active on Facebook and always give love and shoutouts when people give us love,” Fiorini says.

Market Street’s customer base is as diverse as its long house pizza list, ranging from blue-collar workers, like a nearby road construction crew stopping in for a recent late Thursday lunch, and young families, to suit-wearing business professionals with laptops.

“What I wanted to create was a neighborhood pizzeria to bring family to, and have the kids play around, but you could also have a business meeting or a date,” Fiorini says. “I wanted to make it feel like it’s been here for a long time.” ♦

LOCALS LOVE MARKET STREET
After seeing so much buzz on social media, we asked diners to share what they love about Hillyard’s new pizza parlor.

Joe Sousa: Their crust is easily the best in town. Somehow they get that perfect balance of crispy and chewy at the same time. Add on their excellent sauce and you pretty much have a perfect pizza.

Jody Adams: I’ve been waiting for great fried pickles in Spokane and guess where I found them from: Market Street Pizza Parlor!! I ate more fried pickles than the pizza we ordered!

Stacie Kearney: The crust is fantastic! The specialty pizzas are delicious flavor combinations, I love the barbecue chicken pizza with local barbecue sauce and I add the hot honey.

Rhea Gabriel: They have brought a whole new spin on the pizza game here in Spokane and provide a delicious, fun and innovative flair to their menu.

Meagan Knapp: The food is phenomenal, no doubt about it, but also, when you walk through the doors they make you feel like you’re part of the family.

Commella Prigan: They have many gluten-free options and their cauliflower crust is amazing! [The] new fall menu has options for many different dietary needs/preferences.

Danni Marie Gadberry: Their garlic fry bread is so yummy it’s almost a meal on its own, and the Carnivore pizza is bomb, too.

Thu Oct 1 , 2020
Metropolitan police detailed plans Thursday for a new training center to help officers prepare for active-shooter events and other complex threats to public safety as the Las Vegas Valley mourned those killed in the mass shooting at the Route 91 Harvest festival three years ago. The Metropolitan Police Department Reality […] 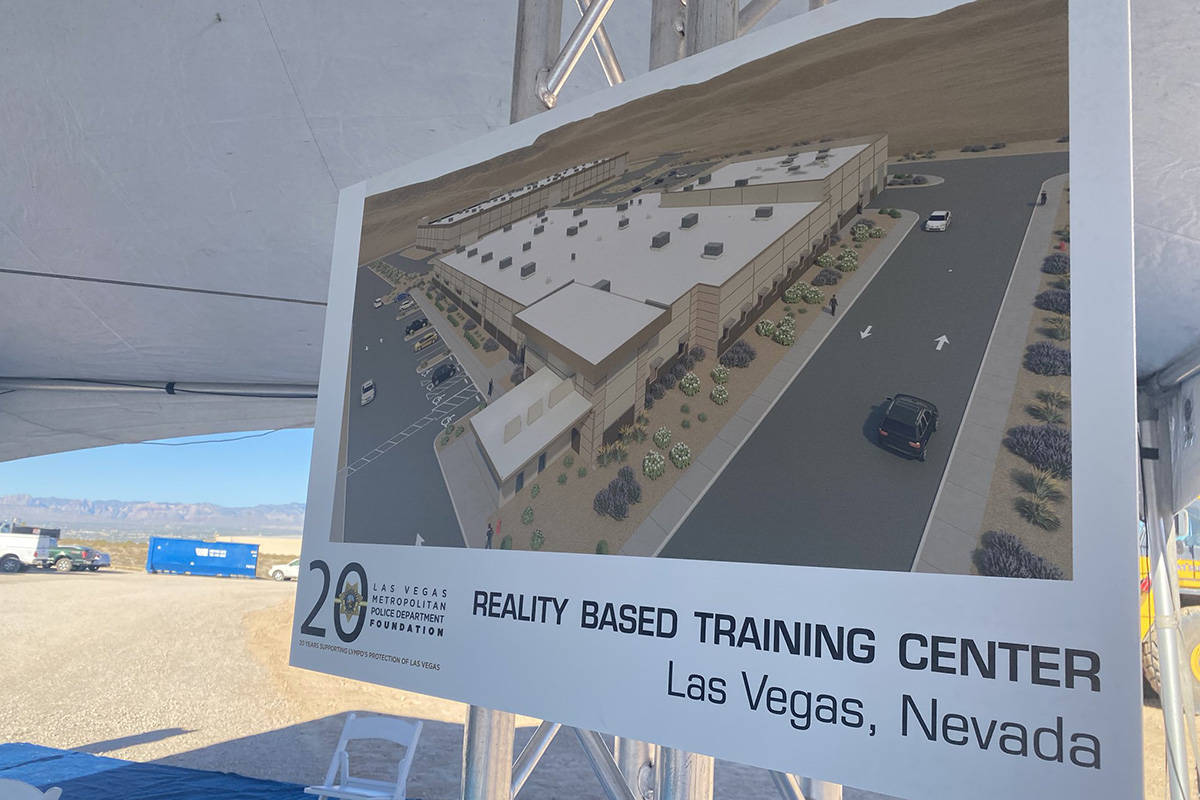