I can see my mother now as she wrestles sponge shapes, icing and cardboard into a vertical space rocket. The year is 1994 and everyone is having a Jane Asher novelty shaped cake from the Asher’s Party Cakes book. Little did Mum realise – there being no local Marks & […]

I can see my mother now as she wrestles sponge shapes, icing and cardboard into a vertical space rocket. The year is 1994 and everyone is having a Jane Asher novelty shaped cake from the Asher’s Party Cakes book. Little did Mum realise – there being no local Marks & Spencer – that a ready-made, easily sliceable Colin the Caterpillar cake was available to buy, and that it would become my generation’s go-to celebration cake.

With his cute, edible face, swiss-roll-style milk chocolate sponge and colourful Smarties-style sweets, Colin “offered Jane-style creativity and finish in a ready-made package, but with the M&S stamp of approval to allay the guilt of not baking it yourself – win-win”, says Angela Clutton, a food writer and historian. While the retailer has had its ups and downs – particularly in the past decade – Colin’s sales have grown steadily, hitting a peak of 15,500 units a week in spring this year. Last week he turned 30 and, to mark the occasion, M&S released miniature versions of his face, that thick, smiling slab that is the most prized part of Colin and traditionally awarded to the birthday boy or girl.

“I think the face is what makes it so brilliant,” says Tom Westerland, the head chef at The Grill at Crockers in Henley. “I know I work in the business, but I usually buy a Colin the Caterpillar cake for my chefs whenever it’s one of their birthdays. We enjoy the silliness of Colin.”

The face is actually one of the few parts of Colin that has changed over the years. “When he launched, he had no feet and a fondant face,” says Natalie Tate, a food bakery product developer at M&S. “Over the years, Colin has gained six white chocolate boots and a white chocolate face with the characteristic cheeky grin.”

“He looks good – but he tastes good also,” says Gerhard Jenne, a baker and pastry chef who founded Konditor & Cook – now Konditor – just three years after Colin’s debut. At that time, in the early 1990s, the British cake scene was “a bit of a wasteland. There were French patisseries and bread shops, but there weren’t cake shops like there are now,” he says. Jenne found he had to sell savoury food alongside his cakes, “to lure customers in so they would buy a brownie once they’d bought a sausage roll”.

Novelty cakes were usually baked at home, while supermarket offerings were largely confined to round sponges or large sheet cakes topped with royal icing. In this landscape it was relatively easy for Jenne to make a name for himself among high-end customers who could afford to pay someone else to create cakes along the Asher lines.

“Jane Asher started making those cakes with mice in the bed and novelty shapes of animals and objects,” Jenne recalls. “So that was what people ordered from us: cakes in the shape of animals, trains, cars and so on, for big themed parties, for people like Tina Turner and the Rolling Stones.”

Colin’s success was buoyed up by the fact that, that unlike many other cakes, which relied on sugar paste to craft intricate designs, Colin wasn’t overly decorated to the point it compromised on flavour – and, crucially, he was easy to slice.

“Honestly, a lot of people struggle with that,” laughs Jenne, “even with cakes that are round. A swiss-roll shape is easiest.” That Colin is simple to serve is no happy accident; back in 1990, M&S and its cake supplier, Park, “undertook many trials looking at character cakes in a bar shapes, finally experimenting with a sponge roll”, says Tate. They also considered other elongated animals – “snakes, crocodiles and fish” – before settling on a caterpillar.

Did The Very Hungry Caterpillar, Eric Carle’s seminal children’s book, influence Colin’s inception? Not to Tate’s knowledge, though it must surely have influenced his market appeal. The book, featuring another colourful, anthropomorphic caterpillar, might be 21 years Colin’s senior, but it is consistently in the bestseller list, with one book sold every 30 seconds worldwide.

“I think the children’s book has helped to keep the spirit of the caterpillar alive,” Jenne reflects. “Of course, the swiss roll shape lends itself to a caterpillar.” Whether subliminal or not, the association deepens the sense of nostalgia that surrounds Colin – particularly for those of my generation, who grew up on Carle’s caterpillar, had Colin as a staple feature of childhood birthday parties, and have continued to buy him for friends and colleagues long into adulthood.

“My birthday just passed this month and when my mum came to visit, she brought me a Colin – never too old for one!” says Tom Brown, the 33-year-old chef owner of Cornerstone in London. When Milli Taylor, an event caterer and the author of Perfect Party Bites, was at university, her flatmate returned with a Colin the Caterpillar because she was “feeling homesick and a bit sad … it did the trick,” she says. “That first crack of the chocolate coating in contrast to the smooth buttercream and soft sponge … was a true madeleine moment.”

But the cake landscape has greatly evolved since Colin’s birth. The appearance of Nigella Lawson’s How to Be a Domestic Goddess in 2000 “changed everything”, says Clutton. Her classy, cool-yet-approachable selection of baking recipes spawned a new generation of bakers, creating a cake craze that led to the first Great British Bake Off in 2010 and has continued almost unabated since.

“Cake has become more of a lifestyle thing,” observes Jenne, who has six cake shops. There are cake stalls in every farmers’ market, cakes in every coffee shop, cake courses for enthusiasts – and that’s before you consider the explosion in private businesses selling online and through Instagram, creating ever more colourful and conceptual masterpieces for weddings, birthdays and other events.

That the mass-produced Colin continues to stand shoulder-to-shoulder with these artisanal offerings is extraordinary. In the early 90s, stars would pay Jenne hundreds of pounds for a novelty cake; today they might be just as likely to request a Colin, judging by his celebrity fanbase, which includes Dame Judi Dench, Taylor Swift, Liam Gallagher and David Beckham.

While the regular Colins clean up at smaller parties, his giant incarnation – a supersize Colin serving 40 people – means he has even got a slice of the wedding cake market, with guests gathering round to watch the happy couple break his face in two. Most remarkable of all though has been Colin’s ability to stay one step ahead of the game, despite numerous threats from what M&S’s branding team call “copy cat-erpillars”.

In 2011, Sainsbury’s launched Wiggles the Caterpillar. This was joined by Asda’s Bonnie and Clyde (male and female caterpillar cakes with green and pink chocolate faces respectively), Tesco’s Curly, Morrison’s Morris (a yellow-chocolate-faced caterpillar) and the Co-op’s “Curious caterpillar cake”.

Waitrose’s Cecil was late to the party, in 2015, but is the most Colin-like in price (both are £7), appearance and plummy name. That these cake critters are all still on the shelves suggests there is a good market for them, but Colin consistently comes out top in taste tests: the HuffPost, the Sun and several blog sites have reviewed them recently.

While there have been numerous iterations, including Christmas Colin, Halloween Colin and limited editions for events such as the Queen’s diamond jubilee and Macmillan coffee morning, neither the core recipe nor the supplier has changed in 30 years – making Colin a familiar and dependable source of solace in an uncertain world. Whether Colin will live to see his 40th birthday, however, remains to be seen.

Last month, M&S announced plans to axe 7,000 jobs, as sales of homeware and clothing continued a downward trend thanks to coronavirus. Office workers were a key market for Colin – “He’s hugely popular with office birthday parties,” says Tate – but with the notion of returning to offices in doubt, it’s hard to see much of a future for office parties.

Meanwhile, the world of cake design continues to evolve at pace: Instagram feeds of professional bakers showcase extraordinary creations. “Instagram influences what people expect, and cakes are becoming more and more stylised,” says Jenne. Perhaps Colin will one day metamorphose into an elaborately decorated butterfly. For now, though, Colin continues to lift our spirits and satisfy our senses – and there is a lot to be said for that in 2020. – Guardian.

Sun Oct 4 , 2020
When our partner puts in his or her everything to make our birthday extra-special, it is their love that steals our heart one more time. More than the efforts, we appreciate the fact that we are immensely important to them. Priyank Sharma has tried to put in his efforts to […] 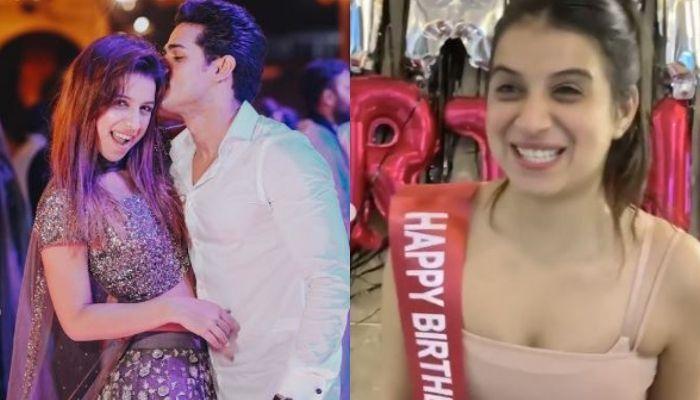