© Provided by Chowhound If you’re the proud owner of a sous vide machine but are looking for more ways to use it than by simply boiling an egg, you’ve come to the right place. Anova sous vide recipe developer Christina Wylie is here to guide you in wielding the […]


If you’re the proud owner of a sous vide machine but are looking for more ways to use it than by simply boiling an egg, you’ve come to the right place. Anova sous vide recipe developer Christina Wylie is here to guide you in wielding the appliance at home—without fear or having to parse through complicated scientific jargon.

Related Reading: How to Grill Lobster Tails, Shrimp, Oysters, Crabs, and Other Shellfish

Sure, sous vide sounds a little complex, but it’s actually pretty straightforward. The name, which comes from the French meaning “under vacuum,” does just that: sealing food in an airtight container and cooking it in temperature-controlled water. You can tuck just about anything in one of these vacuum-sealed bags—like proteins coated in marinades and herbs—and sink it into a tub of water. By remaining at a constant temperature, the process is pretty gradual, cooking until your desired protein reaches the same temperature as the water. That means you’ll never have to worry about an overcooked slab of meat again.

But back to Christina. Her cookbook “Sous Vide Cooking Made Simple” will be your guiding light for everything sous vide. The book is filled with 70 sous vide recipes, broken up into sections including starters, meat, seafood, breakfast, and even dessert. You’ll learn how to prepare the likes of slow-cooked beef stew, a rack of lamb rubbed with garlic and rosemary, and tuna with olive tapenade.

Christina devotes plenty of space to the art of sous vide, so even if you’ve never employed the technique you can still feel confident going in. You’ll learn all about appropriate bags and how to close them for sous vide cooking, an overview of times and temperatures, and tips on tackling some of the most popular sous vide dishes, like eggs, steak, and chicken.

Ahead, a recipe for sous vide butter-poached lobster tails, which is surely one of the best ways to enjoy lobster. Although cooking lobster is often considered a bit of a challenge if you’re not used to working with the finicky seafood, this technique guarantees you won’t have to eat overcooked lobster—a veritable disaster. Instead, you’ll be rewarded with a silky soft tail that’s anything but dry or tough. All you’ll need to do is first cook the lobster tails for two minutes in boiling water, then seal the tails into a vacuum-sealed bag, accompanied by a garlicky butter sauce. The lobster tails will remain in the sous vide water at 133°F for 15 minutes, after which they’ll be promptly removed and topped with more brown butter. It’s an elegant, restaurant-y dish, perfect for date night or anything in between.

In defense of those who have overcooked lobster in the past, it’s easy to do using conventional cooking methods. Using sous vide, however, it’s reasonably simple to create the silky, moist, soft lobster of your dreams (okay, that was a bit dramatic, but you may not have ever tasted lobster quite like this). There are many conflicting opinions out there on what temperature is ideal to cook lobster sous vide. After plenty of trial and error, I believe that 133°F/56°C for 15 minutes makes the tails just-cooked, which is the way they should be (in my opinion). By cooking it for longer at a lower temperature than you would if you boiled it, you’re able to get a less rubbery texture, and definitely no dryness.

Sat Sep 26 , 2020
In the restaurant industry, we’re taught to be like a swan. Under the water where no one can see, you paddle as hard as you can. Above the surface, you are graceful and composed. Guests should not be privy to the hardships or stressors we face. Since reopening our four […] 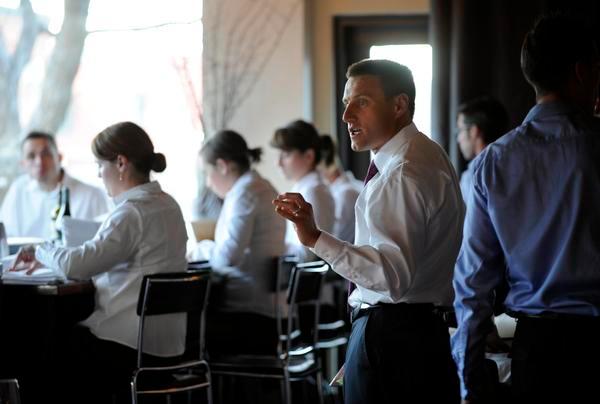