Rhubarb is now widely known as a tasty pie filling but it has been around much longer as a medicine than it has been enjoyed as a dessert. Photo: Getty Images/EyeEm Considered an important medicine in China for thousands of years, rhubarb has had many ups and downs over its […]


Rhubarb is now widely known as a tasty pie filling but it has been around much longer as a medicine than it has been enjoyed as a dessert. Photo: Getty Images/EyeEm

Considered an important medicine in China for thousands of years, rhubarb has had many ups and downs over its long history of human consumption.

Its leaves, packed with toxic oxalic acid, might once have poisoned a US president; in the 1600s, smuggling valuable rhubarb root warranted death in Russia; and centuries later, when the heavily sugared stalks were used in desserts, rhubarb was mercilessly lampooned as a horrible British school pudding.

Rhubarb has now come full circle, from important medicinal laxative to dessert delicacy. The vegetable’s pink stalks are served in fine restaurants, perhaps roasted with orange and crystallised puff pastry, poached and served with melon granita, or simmered with orange juice and presented as sweet soup.

Get the latest insights and analysis from our Global Impact newsletter on the big stories originating in China.

But rhubarb has been around much longer as a medicine than it has been enjoyed as a dessert, and it is noted in what is thought to be the first text on traditional Chinese medicine, The Herbal Classic of Shen Nong, said to date from the third century. Known as the “Divine Farmer”, the mystical and mythical Shen Nong is believed to have lived around 2800BC. According to Chinese legend, Shen Nong tested many types of potentially medicinal plants on himself. He classified rhubarb as a herb and noted that “the roots and rhizomes of rhubarb” could be used to cure diarrhoea.

© Provided by South China Morning Post
Despite its reddish or pinkish colour, rhubarb is known in China as the


These days, rhubarb root is still used in traditional Chinese medicine and by Chinese people around the world to treat stomach ailments, especially constipation.

Used in decoctions (a concentrated liquor resulting from heating or boiling a substance), soups and as extracts, rhubarb root is prescribed by traditional Chinese medicine practitioners to treat ailments as varied as constipation and bleeding ulcers, Feng says.

Freezing your body to come back to life later? China offers it

Ancient Greeks valued medicinal rhubarb; Romans called it Rheum rhabarbarum – from the barbarians who lived beyond the Rha, or the present-day Volga river in Russia. Arab doctors from the ninth century used rhubarb root purges.

Much later the Italian explorer Marco Polo found a thriving trade in the leafy vegetable in Mongolia and China in the 13th century. The explorer found the plant, known in China as the “great yellow” – perhaps because of its thick yellowish roots – in the land of the Tangut people in Mongolia and in the far north of China, west of the present-day city of Beijing. “Over all the mountains of this province rhubarb is found in great abundance, and thither merchants come to buy it, and carry it thence all over the world,” he wrote.


Over time, as word spread, rhubarb became a highly sought-after and prohibitively expensive medicine in Europe. In France, by the 1500s, the root was 10 times as expensive as cinnamon and four times as expensive as saffron. The cost was high partly because it was imported via long caravan routes from the east via Turkey and Russia.

In the 1600s, Russia saw the value in establishing a valuable monopoly over the rhubarb trade in Europe, and breaking the monopoly was punishable by death.

Emma Kay, a British food historian who founded the Museum of Kitchenalia in England’s Cotswolds area, says rhubarb was smuggled into Britain from Russia by a Scottish doctor called James Mounsey, who set up a practice in Moscow in the 1700s. The doctor treated both Russian Tsar Peter the Great and Catherine, Peter’s second wife and successor.


“Following the Tsar’s death – perhaps contrived by Catherine and her lover – Mounsey was put in an awkward position, facing exile or death by association and managed to persuade Catherine to retire him on the grounds of ill health,” Kay says.

Mounsey then carried several pounds of rhubarb seed from Russia to Scotland, and was awarded a gold medal for his pains, but Kay says he spent the rest of his life in fear of being caught and punished by the Russians.

Rhubarb was a wonder plant in those days, regarded as a useful medicine in Europe, and later, a tasty tart and pie filling as well.

“Just as we once used leeches and cupping to purge bodies of substances thought to poison the body, rhubarb provided a hugely popular alternative form of purging, a trend which lasted into the 20th century,” Kay says.


By the 1700s, rhubarb came into its own as a food, a popular and delicious alternative to gooseberries. Rhubarb tarts, Kay says, were included in The English Art of Cookery cookbook, published in 1788 and written by Richard Briggs, a well-known cook of the time.

In his tart recipe, Briggs wrote: “Take the stalks off the rhubarb that grows in the garden. Peel the skin off and cut them the size of a gooseberry, put them into china or earthenware patty pans, with sugar over them, and put on a paste either puff or tart, ice them, and bake them the same as green gooseberries, and they will eat like them.”

Kay notes that when Briggs wrote about “icing” the tarts, he simply meant brushing beaten egg whites, with or without sugar, over the pastry.

For me, the colour of rhubarb is so beautiful. I like to wash it and use the peel to make a syrup, and then poach it in its own syrup so it infuses not only with the colour, but with the strong flavouring

Rhubarb was also gaining ground as a food in the US, even the leaves, which are full of bitter and potentially dangerous oxalic acid. US President Thomas Jefferson, whose Monticello estate in Virginia is still open to the public, enjoyed eating rhubarb leaves. In April 1809, he noted the day’s plantings, including a “row of rheum undulatum, esculent rhubarb, the leaves excellent as spinach”.

Oxalic acid gives rhubarb its delicious tart taste, but most experts now warn that eating the large acid-loaded leaves is not advised. The acid can adversely affect organs, including the kidneys, and can lead to kidney stones and, potentially, death. Jefferson died in 1826 at the age of 83 from a combination of ailments, including a kidney infection.

During the food shortages of World War I, British authorities encouraged people to eat rhubarb leaves, resulting in several poisonings and deaths.


Even so, the attractive pink stalks, containing far less acid, continued to be a popular dessert ingredient, both in Britain and the US. Regularly called the pie plant in parts of America, rhubarb is often paired with sweeter strawberries; strawberry and rhubarb pie, often seen with a fancy latticework top, is a favourite across the US.

Karys Logue, a chef with Black Sheep Restaurants in Hong Kong, grew up eating rhubarb pie. “As a kid that’s the only way I had ever eaten rhubarb, as rhubarb pie,” she recalls. “My grandmother used to can and preserve rhubarb jam.”

In the frightening early days of the Covid-19 pandemic in Hong Kong, she turned to strawberry and rhubarb pie as a “crowd pleaser, and really just comforting” dessert for Burger Circus, one of the group’s restaurants. The pie was also sold whole at the Butter Cake Shop, another Black Sheep outlet.

“I’ve done plated desserts with rhubarb at a variety of different restaurants I’ve worked at, in New York and around the world, over the years, and when I first came onto the team at Black Sheep I thought it would be fun to do a pie from my childhood,” Logue says.

Balancing the plant’s astringent bitterness, adored by some people, is simply a matter of adding sweetener – in greater or lesser amounts. “Luckily in the pastry kitchen you have plenty of sweet ingredients in your arsenal,” Logue says

“For me, the colour of rhubarb is so beautiful. I like to wash it and use the peel to make a syrup, and then poach it in its own syrup so it infuses not only with the colour, but with the strong flavouring. I think it’s just really a lovely ingredient.”

Little wonder pan-dems are happy to stay on

China’s golden week holiday: a welcome getaway for some, coronavirus anxiety for others

This article originally appeared on the South China Morning Post (www.scmp.com), the leading news media reporting on China and Asia.

Fri Oct 2 , 2020
People cruising on Park Avenue Tuesday night might have smelled BBQ in the air. And that’s because B.T.’s Smokehouse’s new Worcester location at the corner of Chandler Street fired up its smokers and grills for a friends and family “soft opening.” It was a trial run for the restaurant’s new […] 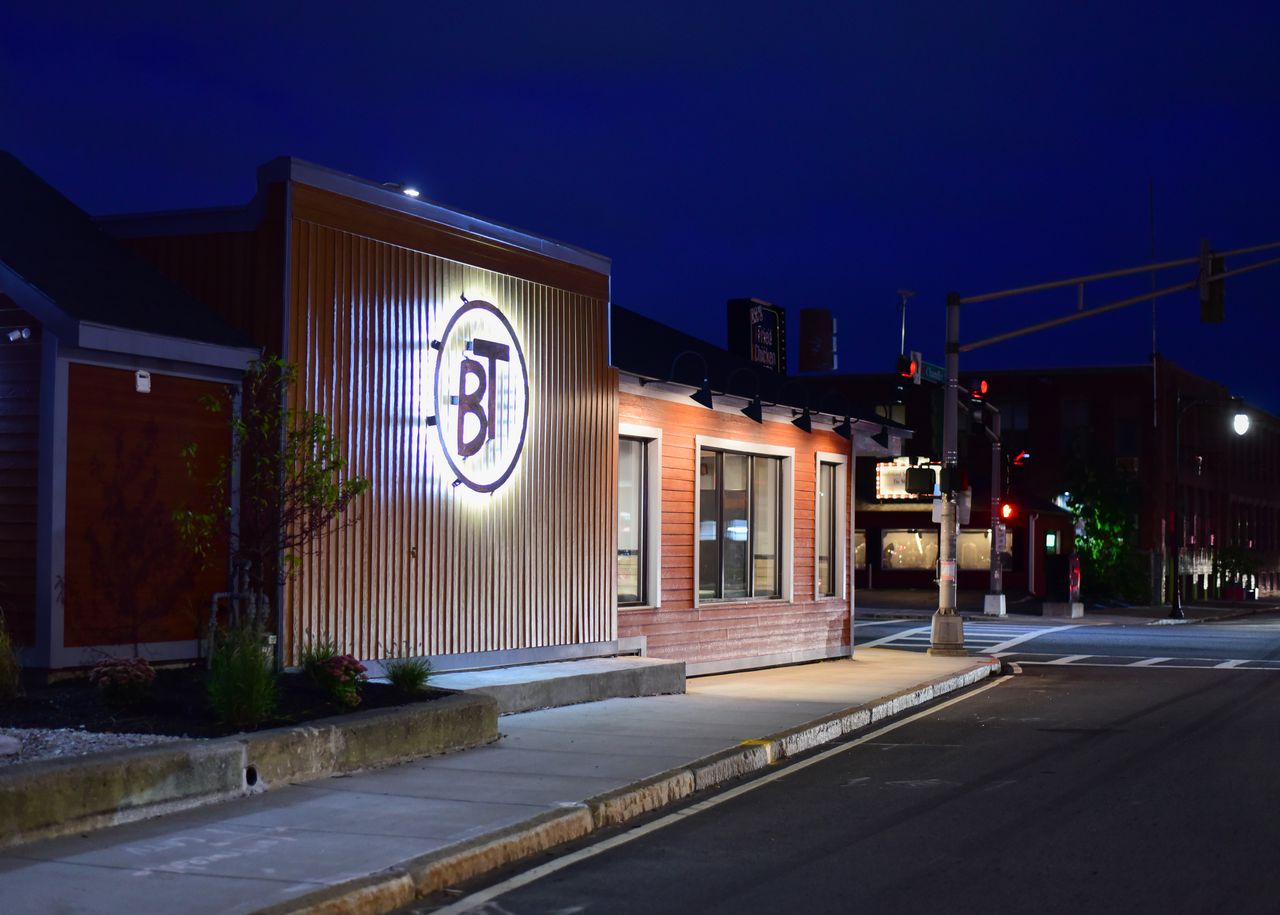