Coffee, doughnuts and a Real Housewife of New Jersey.

What to watch next

Melissa and Joey Gorga of “The Real Housewives of New Jersey” were on the scene at the Dunkin’ on Ocean Avenue in Belmar during lunchtime on Wednesday, Sept. 9, to help the Tri-State coffee and baked goods franchises kick off their post-Labor Day seasons.

The Gorgas served customers and also talked Dunkin’ and the upcoming Season 11 of “RHONJ.” The cast has been filming at the Jersey Shore, including dinner at La Mondina in Brielle on Sept. 3.

Start the day smarter. Get all the news you need in your inbox each morning.

“We’re out and about filming,” Melissa said. “We’re trying to be secret about it but it’s not really working for us because we’re all over the town. It’s definitely a different season for us because  of COVID and the masks and the virus. It’s definitely a different feel for us this year because we’re seated outside, and there’s a lot more filming in our homes. Wow, it’s going to be very powerful, I can tell you that. It’s been amazing.”

© Chris Jordan
Melissa and Joey Gorga of “The Real Housewives of New Jersey” on Sept. 9, 2020 at the Dunkin’ on Ocean Avenue in Belmar.

© Chris Jordan
Melissa Gorga of “The Real Housewives of New Jersey” serves Doris Briggs on Sept. 9, 2020 at the Dunkin’ on Ocean Avenue in Belmar.


“We all have heavy mind over this,” Melissa said. “We’re all mothers and we’re trying to finagle filming and trying to set my kids up at home virtually (for school) and I had to run here today and all my kids are sitting in front of computers. You can’t help but want to (hover) over them but moms have to go to work. We have things to do — it’s a very trying time for moms who have to work right now.”

As for the Dunkin’s, Joey’s there every day.

The Gorgas have a house in Montville and also at the Shore in Toms River.

“We’re always down here so it’s very authentic for us to be filming down here,” Melissa said.

They were quite a surprise behind the counter.

“I couldn’t believe it because I watch them all the time,” said Doris Briggs. “I was on the way down to get an afternoon coffee and I was the first one.”

Why Food Trucks Are Popping Up In This Newton Neighborhood

Thu Sep 24 , 2020
NEWTON, MA — When the pandemic forced people to work from home in March, it left countless businesses and industries, including food trucks, scrambling to figure out what it might mean for them. The farmers markets, the business rush and the food truck festivals that truck owners around New England […] 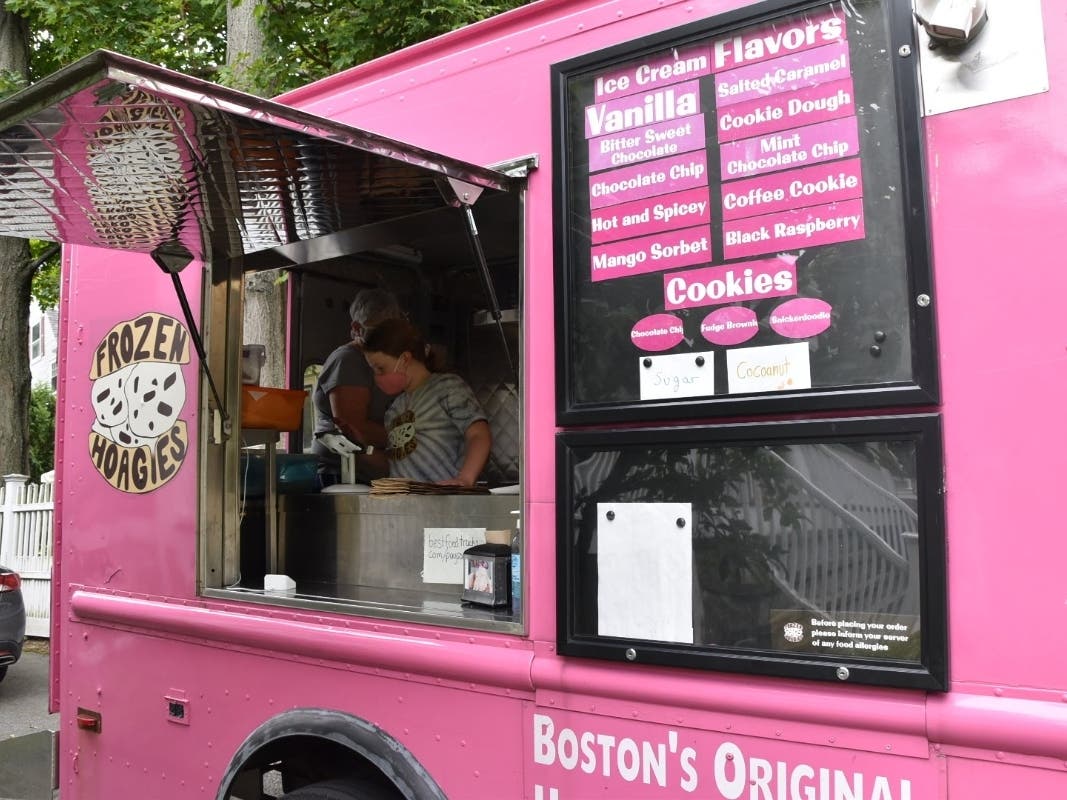