In quarantine, Danish supermodel Nina Agdal has made the transition from walking runways to leading workout classes.  The 28-year-old stunner whose been spending her time in the Hamptons with boyfriend Jack Brinkley Cook, 25, was spotted arriving at her socially distanced workout class in Amagansett.  The model was masked up […]

In quarantine, Danish supermodel Nina Agdal has made the transition from walking runways to leading workout classes.

The 28-year-old stunner whose been spending her time in the Hamptons with boyfriend Jack Brinkley Cook, 25, was spotted arriving at her socially distanced workout class in Amagansett.

The model was masked up at The Reform Club Inn, as she prepared to get heart rates soaring at her Agdal Method class. 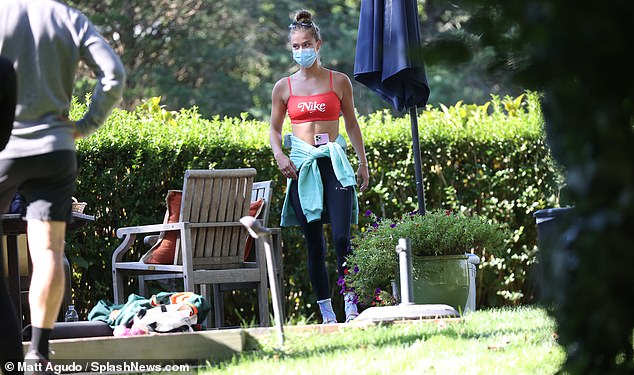 Agdal method: Supermodel Nina Agdal, 28, prepared to teach one of her workout classes out in The Hamptons on Saturday. The Danish born beauty wore a red sports bra and a pair of tight spandex as she taught a group in a socially distanced class

For her day of teaching, Nina showed off her statuesque physique in a red Nike sports bra that she paired with black spandex leggings.

She toted along a green sweatshirt around her waist, tucking her cell phone in her leggings as she walked to the front of the class.

Preparing to get barefoot for the lesson, Nina sported a fun pair of tie dye socks and slides as she went makeup free.

The Victoria’s Secret stunner kept her hair out of her face in a tight topknot, as she slid her sunglasses atop her head. 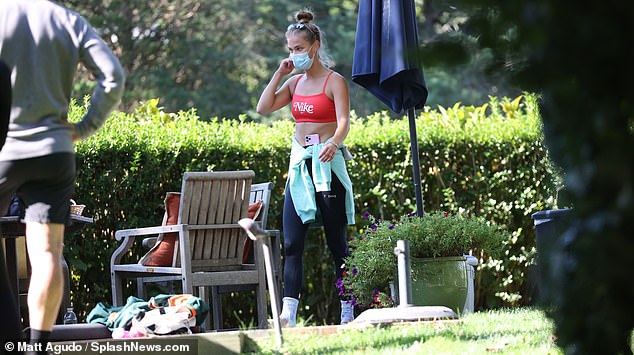 Toned and ready: The Danish born model walked to the front of her class with a mask on as she got ready to sweat it all out on Saturday 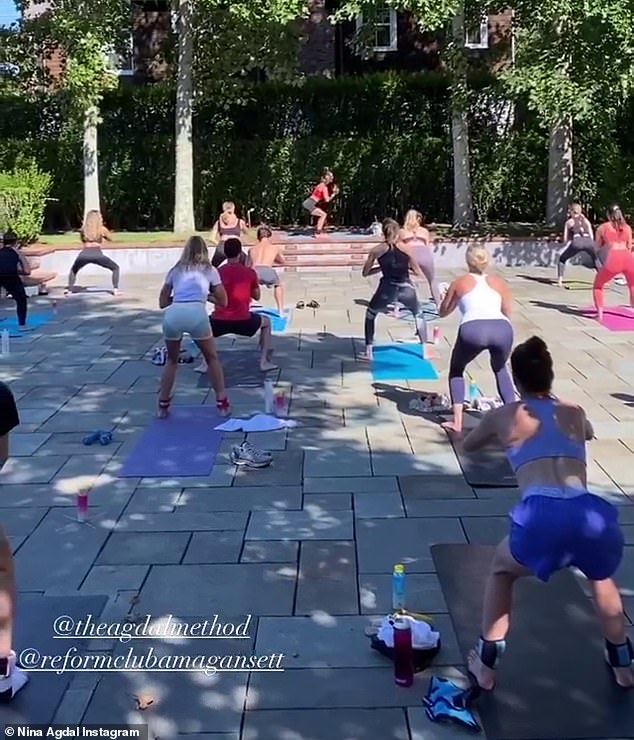 Sweat session: Nina led her intimate class of fitness enthusiasts outside as they switched between various strength training and toning exercises

Making sure to protect herself and others, Nina kept her mask on very tight until she was up at the front in her designated space.

In snaps shared to social media, followers of the method were seen standing on yoga mats with resistance bands and ankle weights as they engaged in a sculpt session.

The fitness method which launched in app form in mid March, allows its consumers to get access to various workouts, in addition to nutrition guides and tips.

Nina has grown a loyal following, engaging her clients in various core-strengthening workouts weekly, and holding in person classes since August. 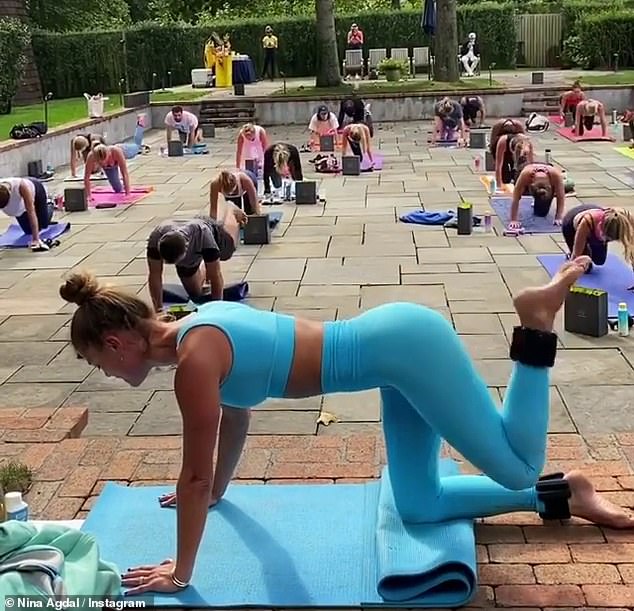 Workout: The fitness method which launched in app form in mid March, allows its consumers to get access to various workouts Nina does, in addition to nutrition guides and tips 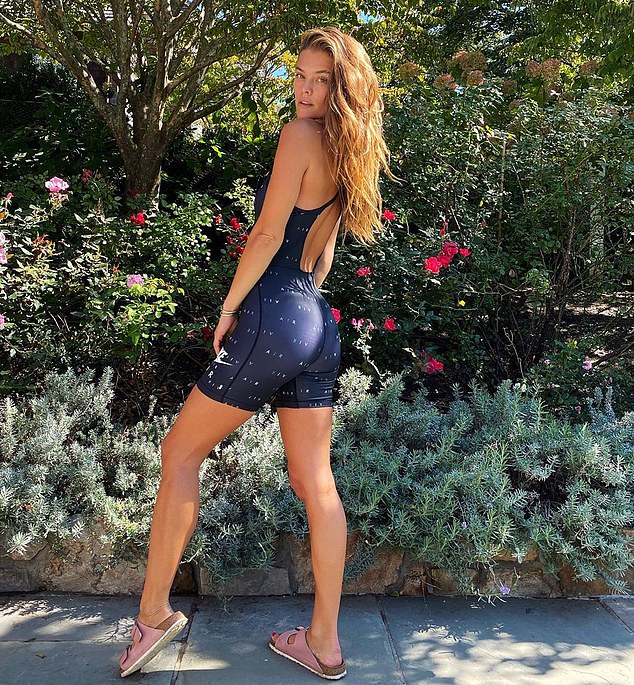 Work and play: Nina rocked a unitard as she joked it was her ‘everyday uniform’ on social media, taking her from her workout classes to the streets

On Friday, Nina took to Instagram to do a Q+A with her 1.6M followers as she answered questions about fitness and her health journey.

The model shared a lot about herself, revealing that even as a model she struggles with body image and weight.

She wrote, ‘My weight has fluctuated like crazy the past 12 years. I started full time modeling at 18 and my weight was all over the place. I’ve been 120 pounds and I’ve been 160 pounds.’

She continued, ‘I truly think that it’s about finding balance, listening to your body, fueling yourself with nutritious foods…and last but not least I stopped weighing myself.’ 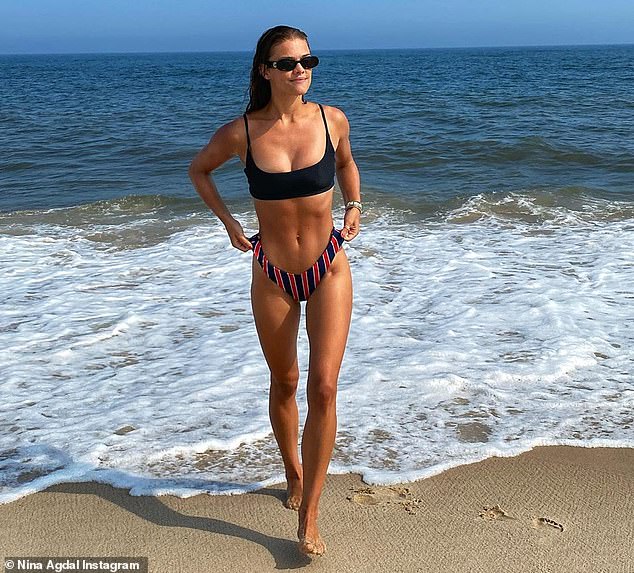 Model figure: Though being an in-demand model has walked many runways, Nina revealed to her fans on Instagram that she too feels insecure with her body at times, as she said her weight has really fluctuated over the years

The Agdal Method founder also told her followers that she wanted to continue building her business and make a bigger community.

When asked if she liked modeling or fitness more, she told the camera, ‘I’m obviously forever grateful for what modeling is doing, and has done for me, but the Agdal Method is all passion – modeling was not.’

Nina also shared that since quarantining together, she and Jack, her boyfriend of three years, have ‘fought less’, as she said they have figured out when to step back and give each other space.

‘It has definitely taught me to let things breathe and also on my end not to take out my frustrations on him but to go for a walk and just analyze my own brain and thoughts instead’ adding that this time has been a ‘learning process’ for them. 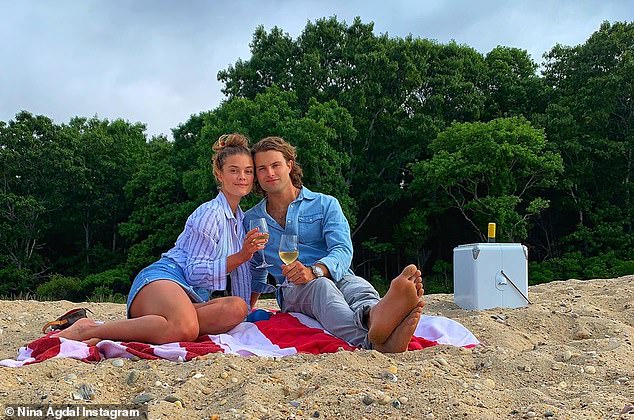 Lovebirds: Nina and Jack have been dating for three years. The pair have been quarantining at his mom Christie Brinkley’s house in the Hamptons

Fish and chip shop reeling customers in during COVID-19 recession