CLOSE Here are 10 Indianapolis-area restaurants that opened in 2020 during the pandemic. Take a look! Wochit Corrections & Clarifications: An earlier version of this story misspelled Jessica Kartawich’s first name.  From the jump, the team of bakers led by pastry chef Pete Schmutte had to make changes at their […]

Here are 10 Indianapolis-area restaurants that opened in 2020 during the pandemic. Take a look!

From the jump, the team of bakers led by pastry chef Pete Schmutte had to make changes at their Chatham Arch bakery opened last month, going bigger in almost every way.

Chocolate and almond croissants would sell out by noon. On Sundays, the bread, baked by Sam Blythe, would be gone by 11 a.m.

“The biggest surprise has been the amount of business we’ve done,” said Jesse Blythe, the fifth co-owner of the 50-seat shop at 1101 N. College Ave.

So they upped production and hired additional employees, now at five with a complement of interns.

They also extended hours. After seeing customers land in front of the store for its 9 a.m. opening on Sundays, Leviathan began opening an hour earlier.

“On Sundays, I would get here at 7 a.m. and there’d be people just waiting outside at about 8 a.m., so we had to push the hours back,” Jesse Blythe said.

And now the crew is considering expanding the counter-service operation, which also sells beer and wine and closes at 5 p.m. Monday through Saturday (3 p.m. on Sunday) into the dinner hour.

“We’re already doing a lot of sandwiches and soups and salads and things like that. This would be just expanding that menu a little more and having people come in for dinner,” said Schmutte, the CEO who created the soup and sandwich menu, including the croissant breakfast sandwich made with Turchetti ham, bacon, gruyere and shallot-baked eggs with mild salsa verde ($8) and the signature jambon-beurre, ham and European-style butter on a baguette with a side of grain salad ($10).

Known for desserts he crafted while at Cerulean and then Beholder — he once topped a white chocolate tart with caviar — Schmutte’s stamp is all over the dessert side of the bakery case, where his mousse-based cakes call out to customers.

The team came together over a feeling that pastry chefs were not getting their due in restaurants.

“We have all worked together before, and we were in a position where we were looking to build our own home. We all have certain common things that are important to us — a focus on the craft, quality ingredients, artisan handmade pastries and breads — but also a focus on care for our employees and care for ourselves,” Schmutte said.

“A lot of times the bakery and pastry programs are kind of shoved to the side in a lot of ways. If you talk to an executive chef or a food and beverage manager, they don’t really have a grasp of what it takes to get the job done as a baker. We have specific needs. We have certain ways that we like to work. And trying to get those things across to somebody who doesn’t really understand the job can be a little bit frustrating,” he said. “Pastries isn’t necessarily your moneymaker in a restaurant. But if you want your meal to be good from start to finish, you have to have someone who is savvy and skilled in that part of the meal.”

Pastry chefs say they typically are irritated when trying to persuade management for the space, time and equipment needed for better products. For example, a deck oven with steam and vent features helps produce a baguette with a better rise and crumb structure than can be achieved with a convection oven.

“We’d all gotten to the point in our careers where we just wanted to do it for ourselves,” Schmutte said. “Instead of taking what somebody else is going to give you, you build your own home, surround yourself with like-minded people.”

The space, which had housed the specialty food market R2GO, was one with which they were familiar.

“It was kind of perfect for what we wanted to do without having to do a lot of work on it,” Schmutte said.

In the middle of Chatham Arch, it was near Mass Ave. and the Indianapolis Cultural Trail, as well as a block away from the Bottleworks District development with its under-development hotel, movie theater and residences.

Leviathan Bakehouse officially opened July 20, but had begun doing wholesale before that. It even dedicated a day to the Bakers Against Racism project in June, raising about $3,500 for racial justice and equality programs.

“It was a good opportunity for us to cook together, bake together and raise money for something we thought was interesting and important to us,” Schmutte said.

The bakery currently is focused on carryout, with plenty of space to assemble and hold items for pickup, but has both indoor and outside seating.

With the early success, one would think the team would be eying other locations for bakeshops.

They aren’t, though. They expect growth to be more likely in its wholesale business and are mulling the opening of a production facility.

“We’re going to try to not spread ourselves too thin,” Schmutte said.

Hot beef sundaes add a bit of whimsy to dinner

Thu Sep 24 , 2020
About 10 years ago at a Renaissance faire in Las Vegas we came across a food stand selling hot beef sundaes. They were as awesome as the name implied: a scoop of mashed potatoes, topped with chunks of pot roast, everything smothered in hot gravy, with a cherry tomato on […] 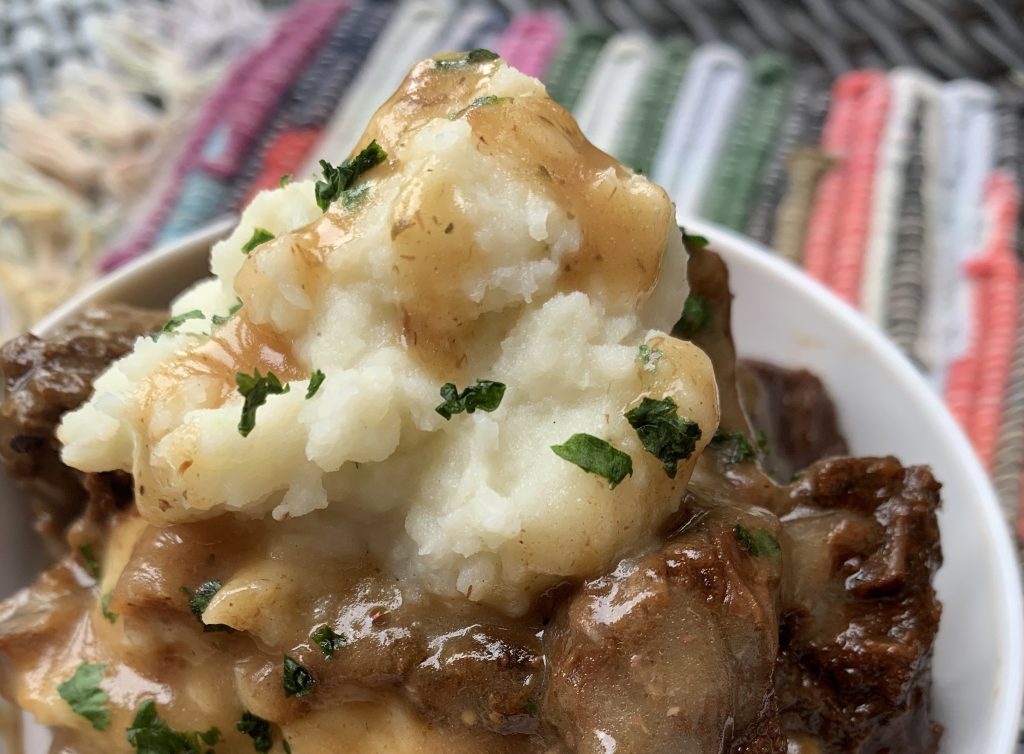