© Rebel Cheese/Facebook Vegan breakfast sandwiches from Rebel Cheese There is no rulebook to guarantee that a restaurant will make it through the lengthy slog that is the COVID-19 pandemic. And as challenges arise that none have experienced before, Austin vegan restaurants are struggling like any other to navigate the […]

There is no rulebook to guarantee that a restaurant will make it through the lengthy slog that is the COVID-19 pandemic. And as challenges arise that none have experienced before, Austin vegan restaurants are struggling like any other to navigate the choppy waters.

It’s all any of these restaurants can do to roll with the punches and keep their eyes on the finish line, albeit a finish line that’s nowhere in sight. Eater checked in with longtime favorites like Mr. Natural, brand-new food trucks like Bone-a-Fide Vegan Bistro, farmers market staples like Luv Fats, beloved trailers like Bistro Vonish, ice cream shop Sweet Ritual, and newer Chinese vegan dim sum truck Plow Bao, among others, to see how these businesses have navigated this year. Many are giving their all to stay afloat in this new, strained economy.

Vegan restaurants have had to deal with some of the same supply issues as other restaurants and food trucks, including ingredient and supply shortages. From specialty ingredients to gloves and to-go containers, the items restaurants need to survive have been hard to come by, putting a strain on chefs and employees. And while vegan food businesses didn’t suffer from the widespread shortages of meat that barbecue and conventional restaurants experienced, hand sanitizer and takeout packaging have become a universal necessity.

Craig Vanis, the owner and chef of vegan food trailer Bistro Vonish, was in the beginning stages of planning a physical restaurant before the pandemic hit and stay-at-home orders took hold in March. The business is now struggling because of steady but low sales.

Likewise, longstanding neighborhood vegetarian restaurant Mother’s Cafe co-owner John Silberberg is afraid that the business, which has been operating for 40 years, won’t last the year, as he recently told the Chronicle. It’s a result of people not feeling comfortable going out as often or dining indoors.

Amelia Raley and Valeri Ward, the co-owners of vegan ice cream shop Sweet Ritual, say that they are doing about 40 percent fewer sales this summer and fall, in a time of year when business is typically booming.

Miraculously, still other vegan businesses are seeing an increase in sales during the pandemic. For dairy-free ice cream brand Luv Fats, found at Austin farmers markets, owner Chi Ndika turned her focus to wholesale business. This was to make up for the lack of customers physically coming out to farmers markets amid social-distancing measures. She increased her wholecase roster from one to four, including Rabbit Food and Bee Grocery, since this spring. However, that comes with its own set of complications.

“Business has definitely increased, which is great,” says Ndika, “but I don’t have anybody to help me under these conditions.” She also doesn’t feel comfortable asking another person to work with her and risk their own health during these times, which naturally limits her ability to expand.

Likewise, Joyce Ni, owner of the vegan Chinese dim sum food truck Plow Bao, was able to buy out her partner this summer, making the business 100 percent hers. Since the truck at Buzz Mill Coffee is still relatively new, having only been open since December 2019, she doesn’t have previous sales for comparison purposes. Ni says she’s seen a steady increase in business since she moved from Buzz Mill’s now-closed location on Shady Lane into its original Riverside address at the beginning of April. In-person takeout orders at the trailer window have increased, but she credits much of her success to potential customers’ ability to order via Uber Eats and through Buzz Mill’s ordering platform via Toast, which makes ordering at any of the food trucks on site a possibility.

Naturally, as business ebbs and flows and the measures surrounding COVID-19 mitigation measures change, there’s been a fair amount of pivoting required when it comes to figuring out day-to-day operations in a safe manner.

Gallery: 7 New Fast-Food Chains You Can Only Find Online (Eat This, Not That!)

As one of many vegan food trucks in town to reduce its hours drastically, Vanis took it a step further. He closed down the trailer completely for several weeks before switching to twice-weekly preorders. This way, fans of his elevated vegan cuisine, like the Brussels mac and cheese and super-soft kolaches, could still get their fix, but they just had to plan ahead on Wednesdays and Saturdays. “This new format is in an effort to keep doing what we love,” he says, “while also minimizing risks to our safety, and the safety of those around us.” He started offering some of his food items, like the kolaches and mac and cheese, at other local businesses, including Dear Diary Coffeehouse and Rabbit Food Grocery.

Sweet Ritual has closed the parlor section of the vegan ice cream shop in lieu of an online-only ordering and curbside-pickup system. As a new offering, the shop started selling celebratory sundae kits, dubbed Ice-Elation kits, with ice cream, toppings, and even items like birthday candles or mad libs for at-home parties or just Tuesday evenings with the family.

Similarly, Mueller vegan deli and cheese shop Rebel Cheese switched to pickup and deliveries in place of dine-in service. Co-owners Kirsten and Fred Maitland even started offering monthly virtual cheese tastings, where customers can preorder a special cheeseboard selection (with or without wine), have it delivered to their home or prepared for pickup, and try them during a small virtual event. The two also recently upgraded to a larger, dedicated production facility with more square footage and flexibility that’s all theirs, instead of sharing kitchen space as they had previously done, even though they’ve seen about a 50 percent decrease in revenue, according to Kirsten.

Most vegan restaurants have had to quickly adapt to brand-new and completely customized ordering systems and keep abreast of constantly shifting safety regulations and local ordinances, which often result in long days and nights of learning new ways to operate.

Raley started the ATX Veg*n Food Business Owners group a few years ago, in an effort to foster community and communication. Because of the pandemic, it switched from regular in-person meet-ups to weekly online get-togethers to share ideas and support, and to foster much-needed community.

“If your business doesn’t adapt, you’re not going to survive.”

“Feeling isolated and frustrated with the pandemic,” says Railey, “these virtual meetings have been a great space to see a friendly face and to commiserate on lost sales, share guides on how to streamline curbside service, and to help promote each other.”

Longtime East Side vegetarian restaurant Mr. Natural is able to survive thanks to its presence on social media and streamlined ordering system (as opposed to many third-party apps, such as Uber Eats and Grubhub, which can take up to 30 percent of each sale) as necessities to keep local businesses on the map. “If your business doesn’t adapt,” says co-owner Jesus Mendoza, “you’re not going to survive.”

Still, though, and perhaps miraculously, for as many vegan restaurant and food truck owners, operators, and chefs that are struggling, just as many are rolling the dice and deciding to open new businesses and locations.

Vegan burgers and barbecue truck Bone-a-Fide Vegan Bistro opened in July after relocating from San Antonio, where it offered mostly catering service and pop-ups. “We had to move unannounced and very quickly,” say co-owners and couple Chris Hamm and Cheryl Knox, “and we were not well known here.” They had to start building a customer base all over again during a time when “people aren’t regularly getting out and trying new things,” they say. However, vegan Austinites can’t get enough of their meatless barbecue, especially since it isn’t readily available in the city. (Revolution BBQ is still closed in Austin while it looks for a new location.)

Many other trucks turned to Austin as they moved or expanded from other Texas cities, including San Antonio vegan fried chicken spot Happea Vegans. Owner Leah Drones was lucky, though, because the hungry Austin crowd was already fairly aware of its existence thanks to its frequent appearances at local vegan events.

Rolando Garza, the chef behind now-closed vegan truck Cool Beans, partnered with Edgar Delfin to open the Austin location of El Paso vegan Tex-Mex truck Lick It Up, despite raised eyebrows. “We didn’t have a choice,” explains Garza, as a chef. “This is what we do, and we intend to do it well. This is something I know how to do, and I feel helps during these times.” The truck, which opened in August at Spider Cafe, already expanded to a second location on Rainey Street.

One thing these vegan restaurants can rely on is a dedicated and supportive customer base with a reputation for showing up when the going gets tough for businesses they love. These food-minded vegans are doing all that they can to help the businesses they love stay above water. “It’s an amazing community. That’s one reason I think we’re still here,” says Kirsten Maitland. “Not just the vegan community, but I’m so grateful for all of our customers.”

However, it’s hard for vegan diners to support these restaurants when they’re also struggling with the loss of jobs and income themselves right now. Vanis is very aware of these factors. “Many folks who would typically support small businesses are unemployed, underemployed, living with the thread of economic uncertainty, or, very reasonably, don’t feel that it is safe to go out more than is absolutely necessary,” he says. “We’re doing the best we can, and enjoying the small moments of the day to day.”

And it’s providing those moments of joy, togetherness, and good plant-based food — from six feet apart — that motivates so many local vegan restaurants to keep offering options that not only keep their boats afloat, but also ensure that the staff and community they love are safe. The rallying cry that will unite them all: Support local businesses, especially these vegan restaurants, so that they’re around after the pandemic ends.

Sat Oct 10 , 2020
Andaz Tokyo Toranomon Hills offers guests the perfect change of scenery without having to leave the city. With the summer heat lingering into the early months of autumn, dining menus highlighting the essence of fall welcomes guests to unique seasonal experiences in the heart of the Tokyo. At the hotel’s […] 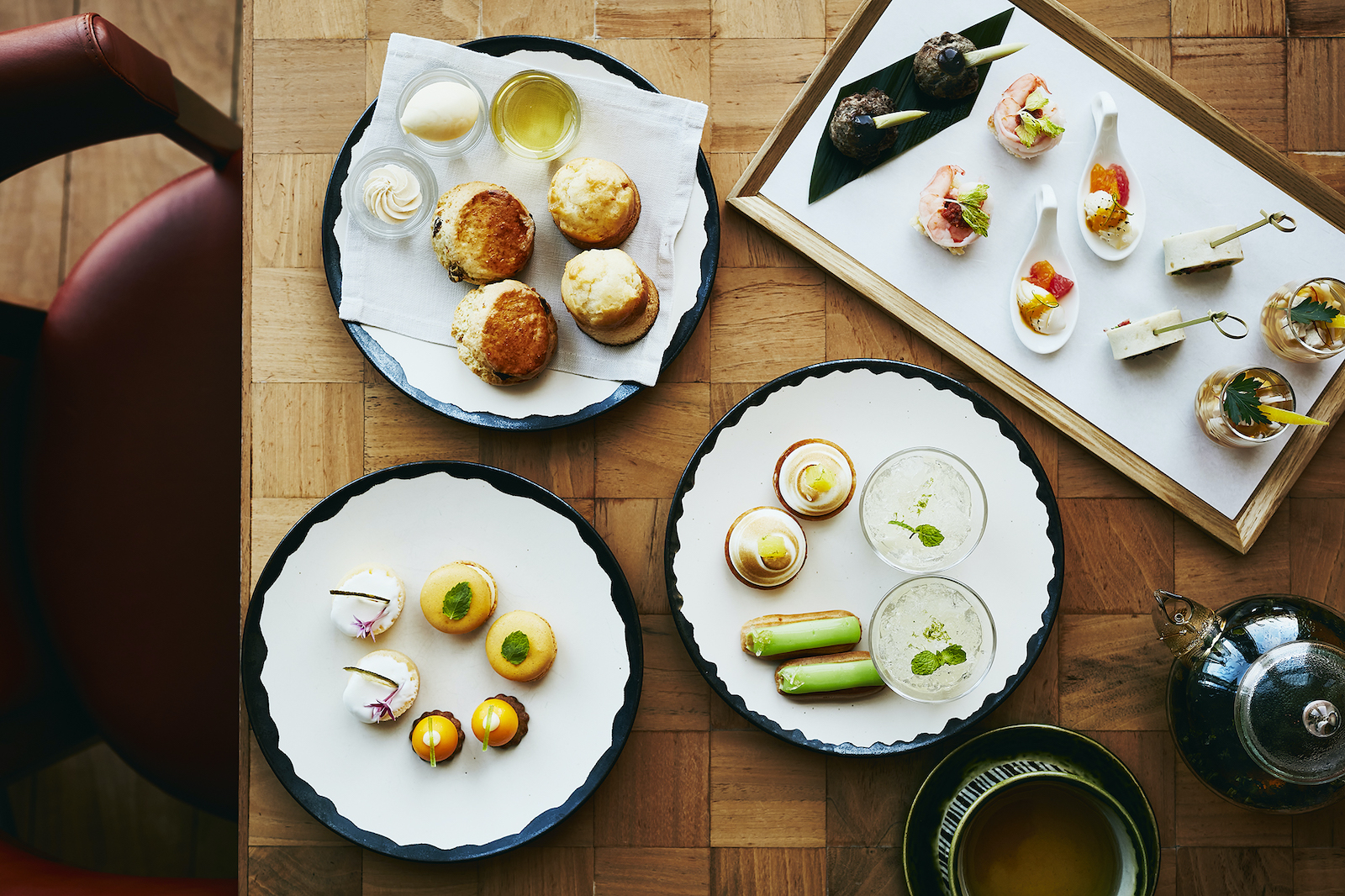