By: James Colgan September 23, 2020 Rory McIlroy was mic’d up for the entire round through his AirPods, which provided an interesting insight into his game (and evidently, his pizza order). Getty Images Rory McIlroy is — like many new-age golf stars — something of a health freak. He meticulously […] 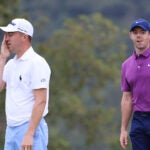 Rory McIlroy was mic’d up for the entire round through his AirPods, which provided an interesting insight into his game (and evidently, his pizza order).

Rory McIlroy is — like many new-age golf stars — something of a health freak. He meticulously watches his weight, works out exorbitantly, and largely keeps himself in great shape for a 31-year-old man. His Peloton classes were a fixture of the PGA Tour’s spring shutdown, and Rory even went as far as sharing his workout routine with his instagram followers (newsflash: it was not easy).

But in truth, none of that should come as a surprise. In the post-Tiger era, golfers have begun focusing on health as rigorously as tempo and short game, and with good reason. The benefits of muscle (and lots of it), are evident from tee-to-green and were obvious nowhere more than at last weekend’s U.S. Open, where Bryson DeChambeau bowled over the field with his domineering new figure.

But for all of Rory’s health-consciousness, there comes a time for cheat meals. Evidently, that time is pizza night.

During Tuesday’s Payne’s Valley Cup, hot mics picked up a conversation between McIlroy and Justin Thomas that gave the golf world its first look at Rory’s surprising pizza proclivities.

Here’s how the exchange went (and you can watch the entire video below):

Rory: “I’ll tell you what, we’re on this big Domino’s kick recently. It’s so good. If you don’t know what the really good local pizza place is, Domino’s is like, solid.”

Thomas: “You know what you’re going to get. Do you guys get the same pizza or change it up?”

Rory: “I get the same. I get the deluxe, but I go with extra sausage, extra whatever.”

Yep. That’s right. A four-time major champion is more than willing to order his pizza (with extra sausage) from Domino’s, the very same eatery that claims over-served college students among its most-frequent customers.

Admittedly, our New York-based staff was aghast at Rory’s admission. Domino’s isn’t pizza at all compared to the thin-crusted, cheesy heaven that exists on nearly every street corner in New York City. This is a matter of personal pride. Some things are more important than golf.

But hey, we’ll cut him some slack. Between Northern Ireland and Florida, there’s not much great pizza. It’s possible Rory has missed out on some of the best New York has to offer during his brief trips to the city. It’s possible (though unlikely) that Domino’s is the best option near him.

Still, Rory, if you’re reading this, consider it a standing invite. The next time you’re in New York, drop us a line. We’ll pay for the pizza (and as many toppings as you’d like). Just give us a chance to change your mind.

Thu Oct 8 , 2020
Shoppers may not be panic buying frozen food, canned soup and peanut butter like they did at the height of the COVID-19 pandemic back in March, but keeping cupboards consistently full as coronavirus fears fluctuate continues to power the financials of some of the biggest packaged food makers. “The way […]